If you’re a Doobie Brothers fan, particularly of their early albums that spawned hits like “Long Train Running”, “China Grove”, “Black Water”, “Another Park, Another Sunday”, “Take Me In Your Arms”, and of course, “Listen To The Music”. All of these manufactured before Michael McDonald joined the band and revitalized their dampening appeal. These hits and the great songs that joined them originated over four classic Doobie Brothers albums that includes: Toulouse Street (1972), The Captain & Me (1973), What Were Once Vices Are Now Habits (1974), and Stampede (1975).

During the Quadrophonic craze that championed albums of the time in 4-channel splendor, these four albums were released as Quad remixes. And while Quadrophonic sound had its appeal, it never really caught with the masses largely because new hardware expenditures were required. Fast-forward to now, Rhino will bundle the four Quad mixes of Doobie Brothers titles mentioned above. 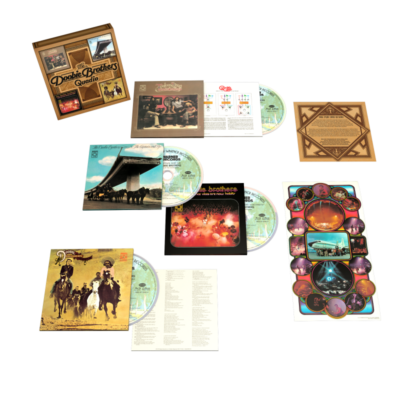 On September 4, watch for The Doobie Brothers Quadio collection. The set will be issued on BD-Audio and will play in your Blu-ray player. If you have a surround set-up, the Quad mix can be enjoyed. Otherwise, the hi-resolution Stereo mix is to be fully enjoyed as a 192kHz/24-bit quality via DTS-HD Master. The set will have a limited release. The Quadio box can be ordered directly from Rhino on this date (here).