Many fans of XTC have loved the available Steven Wilson remixes that have released in the past few years. Chief among those fans is Steven Wilson, who has enjoyed remixing the classic albums to brand new Stereo and 5.1 Surround mixes. To date, Wilson has remixed five XTC titles.

In the days of the early ’80s, Partridge forged a love for Psychedelic music of the ’60s into a band called The Dukes of Stratosphere. With psychedelic music as the main focal point, this band produced two albums, 25 O’ Clock (1985), and its followup, Psonic Psunspot (1987). Both of these releases bookended XTC’s popular classic, Skylarking from 1986. 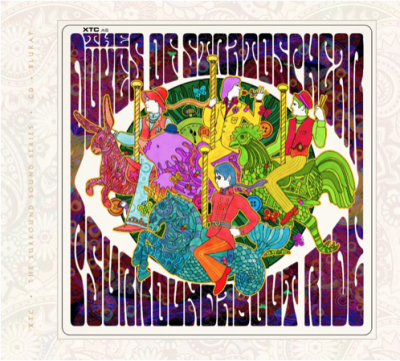 On October 11, watch for the Steven Wilson Stereo and 5.1 surround 2019 remixes of both Dukes of Stratosphere albums contained in a single package being referred to as Psurroundabout Ride. This box will be presented on Blu-ray Audio and CD in the one package.

The Blu-ray Audio disc will provide both 25 O’Clock, and Psonic Psunspot, with all 16 tracks presented in Stereo and 5.1 Surround. These remixes will feature at 96kHz/24-bit.  Two bonus tracks are included with new Stereo and 5.1 Surround. An additional bonus track will be added as 5.1 Stereo Penteo Up mix. A collection of demos from both albums are included as well as instrumental stereo versions of both albums at 96kHz/24-bit. A CD is provided with all 19 songs, 18 of them in 2019 remixed form. Andy Partridge was involved in the remix process with SW.

3 thoughts on “XTC Side Project, The Dukes of Stratosphere, Get SW-remixed BD-Audio/CD Box, Psurroundabout Ride.”