Mark Knopfler to Return with New Album in November, “Down The Road Wherever”

Mark Knopfler returns with a new album, Down The Road Wherever, on November 9. His previous solo record, Tracker, came out in 2015, followed by a collaboration with Evelyn Glennie, Altamira, in 2016. The first single from the album, “Good On You Son,” is now released.

It is too soon to say what stylistic avenues Knopfler has planned based on this song. It features an upbeat rhythm and snap comparable to  early tracks with his band Dire Straits. Then again, Tracker‘s first single “Beryl” did as well, and that record was largely a folk-related collection. We’ll know for sure in a couple of months.

For more about Down The Road Wherever, visit: http://www.markknopfler.com

Meanwhile, earlier this week, it was announced that DSL Dire Straits Legacy would kick off a tour on September 26 in Los Angeles. The tour has no connection to Knopfler presently and no relation to the original lineup of the band including Knopfler, David Knopfler, John Illsley, and Pick Withers. It does, however, feature later additions Alan Clark (piano/keyboards), Danny Cummings (percussion), Mel Collins (saxophone) and Phil Palmer (guitar/musical director). Also, the DSL band features drummer Steve Ferrone (Tom Petty) and – confusingly – producer Trevor Horn of The Buggles and Yes (ABC, Tom Jones, The Art of Noise, Seal, more) on bass. 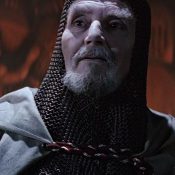 This may turn out to be an interesting collective honoring the work of Dire Straits, but given the lack of original members and seemingly unrelated players added into the fold, we have to rank this with a precautionary three Grail Knights. Caveat emptor.

For more about this tour, visit: http://dslegacy.com