The Doobie Brothers Celebrate With Live From The Beacon Theatre

I’ve attended several Doobie Brothers shows long after their hits days have expired. If there’s one thing I can bring away is the fact that they still put on a great live set. And so it’s no surprise to find a late-era live set hitting the marketplace soon. 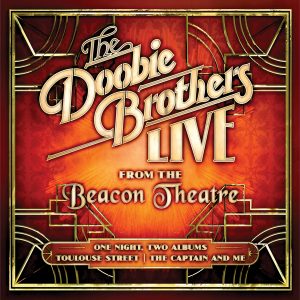 On June 28, the extremely resilient Doobie Brothers will release a live set via Rhino Records of their two night stand at NYC’s famed Beacon Theatre. The plan for those dates were to celebrate Toulouse Street ( 1972) with other selected hits on November 15, and then on November 16, celebrate The Captain and Me (1973), also with selected additional hits. This newly released set will feature the performance sets of both albums and add in selected extra hits. (The album cover states otherwise.)

The set is being referred to as Live From The Beacon Theatre. It will be released as a 2CD set, DD, a BD, and a 2CD/1DVD Deluxe package.

The Doobie Brothers – Live From The Beacon Theatre