I was asked recently what I thought the most influential film score of the last ten years was, and the answer was all around me.

This is not figurative language. Watch a blockbuster movie or a “thriller” television show and you’ll hear it. Listen to commercials and every so often it will be invoked. It has become an audible signature of impending, inexplicable dread, like a ship’s blaring horn bellowing out into the fog so thick, the beam from the lighthouse can’t cut through it, only this horn is ever lower, deeper, and resonant, filling the volume of the harbor only seconds before that ship runs aground.

That is the Inception effect.

Debuting July 16, 2010, critics hailed Inception as a sort of sea-change in the movies: an original big idea action-thriller in the midst of sequels, prequels, remakes, and reboots. Written and directed by Christopher Nolan, and starring many of his core company of actors such as Michael Caine, Cillian Murphy, and Ken Watanabe as well as future longtimers Marion Cotillard and Tom Hardy, the film also teamed him once more with composer Hans Zimmer.

The central theme of the movie, in case you were abducted by aliens eleven years ago and do not know what I’m talking about, is that of a heist, but not a physical one. The protagonists invade the world of dreams, burrowing down multiple buried layers of memory and consciousness. There, one can find the hidden information that can be exploited in the conscious, physical world – information like a code to unlock a safe. The question arises that, if you are so deeply submerged in this world of dreams to the point where you can’t actually tell what’s true and what’s in dream-state, can you really know when you’re out of said dream-state?

To help lull the dreamers into and out of this state, the song “Non, Je Ne Regrette Rien” from Édith Piaf is used as both a trigger and a hook to yank the sleeper back awake. (Roughly translated, the song’s title means “I Regret Nothing.”) A pulsing trudge precedes a bold vocal statement from Piaf, and much like the stretched, blurred, and abstracted senses of someone rising from a deep sleep, that trudge is slowed down and reverberated until the musical passage becomes that menacing fog-dipped horn sound.

This noise so captured the audience’s attention that it became a meme unto itself, and was ruthlessly duplicated for years by other composers. In fact, I recently saw the movie Venom (directed by Zombieland‘s Ruben Fleischer and starring Hardy), and that supersonic rumble, more than eight years out, remains a part of many film composers’ toolboxes. Actually, if you just Google “Inception Sound,” you get: 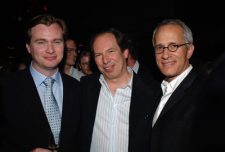 Zimmer cemented his creative relationship with Nolan after The Dark Knight (2008), on which he collaborated with James Newton Howard. The two men had similar backgrounds, with Zimmer having been part of the rock music scene in various capacities including with The Buggles (with Geoff Downes and Trevor Horn, both from a short-lived iteration of Yes). Howard had been with The Elton John Band during the Blue Moves era, culminating with the song “Sorry Seems To Be The Hardest Word.” The interesting “fun fact” about Zimmer’s collaboration with Howard is the degree of separation between them and Elton John, being that Zimmer wrote the score for Disney’s The Lion King in 1995, and John with lyricist Tim Rice wrote the songs.

On The Dark Knight, the duo went in a considerably less straightforward direction. Using dissonant cellos to ratchet up the tension, jacking up the manic madness of the movie’s Joker, Zimmer noted: “I wanted to make a score that nobody would like.” Indeed, the score is suitably angst-inducing and fits the dread surrounding Heath Ledger’s portrayal of the anarchic villain to a T.

Inception is a much different kind of movie that, while still filled with tension, has to invoke the “real world” in a heightened way, rather than The Dark Knight‘s oozing, psychological underworld. In making that a reality, Zimmer enlisted a different collaborator, being Johnny Marr, former guitarist for the celebrated band The Smiths and, briefly, a member of Modest Mouse among other credits. Marr brought a rock sheen to Zimmer’s electronically-enhanced orchestral score, specifically in the hard-charging cue “Mombasa” and the hypnotic closer “Time.”

But what connects the audience to the film, and what those other film score composers have latched onto is that brass-from-hell burp which signifies that which is before you in the dark is much bigger and scarier than what you prepared yourself for.

While Inception became a major hit and solidified Nolan’s status as a pop culture auteur, it did not necessarily change the cinematic landscape. Nolan would return to the Batman character with The Dark Knight Rises (2012) and would be an executive producer for Warner/DC Entertainment’s following films Man of Steel and Batman v Superman: Dawn of Justice, both of which Zimmer wrote for. (He also worked with Nolan on follow-ups Interstellar and Dunkirk.) Unrelated to superhero reboots, Zimmer filled Vangelis’ very large shoes with the score for Blade Runner 2049 with collaborator Benjamin Wallfisch. Inception – once the great critical hope for a break from continually repeated characters and storylines – turned out to be an outlier.

And the slowed-down brassy blurt from “Non, Je Ne Regrette Rien” apparently has become the sound of that counter-revolution. It invokes that dread, that sense of “bigness” that today’s blockbusters require as proof that they belong on that big screen. There’s nothing wrong with that. It simply strikes me as interesting that the concept the sound initially was meant to identify has somewhat come to recall its exact opposite.