I don’t know much about The Comsat Angels, but I’m learning. 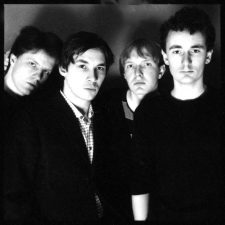 I don’t think it is possible that average American music fans can know much about them, and what they do know is not accurately representational. The band, while having a strong line of pop and rock in their earlier work, was also pretty firmly in the post-punk camp, complete with slashing guitars and a dominant, driving bass. Likely, you know nothing about this because their original label Polydor didn’t get too far with them in the United States and dropped them after three albums.

The band (Stephen Fellows – vocals, guitar; Mik Glaisher – drums; Kevin Bacon – bass; and Andy Peake – keyboards) moved over to Jive Records which, at that time, was the home of A Flock of Seagulls and Samantha Fox. For those who were used to the Polydor years, I imagine it was quite a shock. Gone were the brooding builds, the bridge-hanging bass string rumblings, and to an extent, the post-punk angst. Land (1983), their first for Jive, retained a bit of an edge on the track “Alicia (Can You Hear Me?)” but, for the majority, their formula softened.  The Seagulls connection is furthered as the group’s producer Mike Howlett was recruited to helm the boards for Land.

The Comsats’ second for Jive, and fifth overall, was titled 7 Day Weekend (1985), and was the most drastic series of changes yet for the group. First was the band cover art which framed the Sheffield, England group as a bunch of cute, cheeky Brits, not unlike later Jive acts that capitalized on boy band allure such as Backstreet Boys and N’Sync.  Howlett was back to work on a few of the album’s songs. Then there’s that album title, nodding heavily to a party culture the band never was really a part of, and slightly implying kinship with The Beatles in that the label asserted here were a group of pop-dudes that had more depth going for them just underneath the hair-gelled surface.

I’ve read secondhand reports that bandleader Stephen Fellows  hates – HATES – the album. While he is not entirely wrong in claiming that 7 Day Weekend was a bastardization of the sound and ideals the band had forged previously,  here’s the curious part. It’s not a bad record. It’s demonstrably different, and nothing like the terse stare that represented 1981’s Sleep No More. Yet the majority of the 1985 record is eminently listenable. “You Move Me” manages to recall some of the tough edge of the earlier stuff while retaining a danceable groove and a friendlier love-oriented sentiment.

And then there’s the song most American know but didn’t realize they knew.

The summer of 1985 was the year of the science student comedy. You had John Hughes’ Weird Science, My Science Project, and the Val Kilmer movie Real Genius, the smartest and (for my money) the best of the three. The film was set in a college filled with gifted (and frequently bored) students who unwittingly deceived into developing a laser weapon for the U.S. military. Along with Kilmer, the movie featured Jon Gries (Martin, Lost), Gabe Jarrett, ’80s go-to A-hole William Atherton (Ghostbusters, Die Hard), and Revenge of the Nerds co-star Michelle Meyrink as one of the first manic pixie dream girl types.

If you know this movie, then you know the song “I’m Falling,” a cut from 7 Day Weekend that was used nearly in full for a sequence in Real Genius. No soundtrack was issued for the movie, and it did not fare well at the box office, but many came to know the track through the secondary markets of VHS rentals and cable television. And much like the movie that took the song as its own, “I’m Falling” is uniquely suited. The movie, which surely was an inspiration for the TV series The Big Bang Theory, follows these students as they navigate a world where they are aliens to most due to their intelligence, but also too young to fully grasp how naive they are. It’s a movie that gets very far on depictions of pranks but, at the same time, has a charming streak of sentimentality.

So too is “I’m Falling,” which I can only imagine was pure hell for the band to write and record. It is as conventional as they come and probably as close to Seagulls-ness as the Comsats got, thanks to dominant synths and the focused love-song lyrics. Still, when talented people “fail,” there’s a good chance that they will fail up, not down. As basic as the tune may be, it’s an earworm and, in retrospect, probably had more courage than most of the new wave pop of the era. Fellows and the band seem to be looking toward the example of The Fixx, another ’80s band with more substance than the style immediately revealed.

7 Day Weekend was the last record for Jive. The band would move on to Island Records (and again to Caroline Records), and would slightly rename themselves in the U.S. as the C.S. Angels. You can find all their music if you’re willing to dig hard and pay a solid chunk through the imports market.

An Other Thing: The Dune Trailer is Out – Why Am I Underwhelmed?