The legend of the album Horrendous Disc, the third release from the band Daniel Amos (DA), has overshadowed the actual album itself for many years. Recorded in 1978 and slated to be released via Word Records through the Solid Rock label, founded by Christian Rock pioneer Larry Norman, the album was mysteriously shelved. It would finally be released in 1981, mere days before DA released the fourth album ¡Alarma! on an entirely new label. The move was seen by some as an attempt to capitalize on the band, and as an act of spite by others, an effort to undercut ¡Alarma!‘s viability. 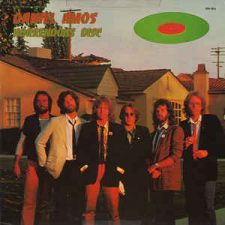 The original release of Horrendous Disc did not benefit from, shall we say, the sturdiest of mediums. Word’s cassettes back in the day were fragile and prone to stretching. The vinyl records were better and, after a few years on racks and then decades of being out of print, highly coveted (which is an odd thing to say about a CCM record, but I digress). A few years into the rise of compact discs, Norman’s later company Phydeaux released a short-run “archival” edition of Horrendous Disc with no input from the band. It satisfied fan interest, but only so much. The sound suffered, and the release is generally considered a failure to serve the title properly.

Negotiations for a collaborative effort between the Norman estate (Larry Norman died in 2008) and DA’s label Stunt Records moved from formative to tentative and back again. At one point, few held out hope that a properly orchestrated reissue might ever occur. Lo and behold, in 2017 a Kickstarter campaign got underway for the fully collaborated, fully remastered, and fully archival Horrendous Disc Ultra Deluxe CD Edition.

To which, a skeptical crowd might scoff, “Yeah, ‘fully.’ Heard that one before.” No doubt, at the tail end of the CD era, record labels have tried to milk the stones with alleged “final word” box sets of individual albums, many of which deliver a remastered album, the same album remixed in 5.1 surround, a smattering of b-sides, and maybe a live concert. Some are for a few key classic albums, and such a treatment is worth it, but more than not, the results can hardly be considered definitive. 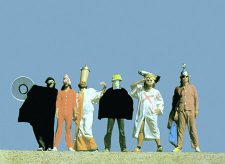 First and foremost, the album has never sounded better. The original tapes were found and baked. Yes, baked. Because magnetic tape is highly unstable over time, the reels need to be warmed in an oven to get the oxides to re-adhere to the film medium. If this doesn’t happen, the tape will flake apart as it runs across analog tape heads, permanently damaging the recording. After this process, the individual audio tracks, or stems, of separated guitar, bass, keys, vocals, and so on can be digitized and put through a modern audio workstation. Hiss and other noises can be diminished. Highs can be brightened and lows can be beefed up. Channel separations can occur with greater clarity and less “bleed,” and you still retain the warmth inherent in analog recording. Long story short, you don’t show up to this game unless you mean to play.

The result of all this is that the actual album of Horrendous Disc, even in its most pristine original release, has never been as good as this latest iteration.

But that wasn’t enough. A large part of the delays that plagued the project was due to the “Ten Biggies.” Recorded concurrently with the album, the band workshopped tracks to demo for major record labels. Consequently, Horrendous Disc‘s power-pop sound with spiritual overtones was carried over to tunes that had more of a secular bent, such as guitarist Jerry Chamberlain’s “Cinema Girl” and bandleader Terry Taylor’s “She Gets To Me.” There was no reason to pull together an ultimate edition without these included, provided the tapes could be found. They were, and so, they are.

Anything else? A fourth disc of curiosities called “Wonderous Cosmic Flashes” that reveal even more tracks that never got traditionally recorded but were captured in concert: things like “Secret Scripts & 3-D Glasses,” “Mary Baker Eddy,” “Everyone’s Fallen Down,” and so forth. Housed in a decorative box, the set also has a booklet of exhaustive notes and histories, a sticker with the DA logo, a fluorescent orange guitar pick with the same, and a modernized replica of that infamous button. Many may recall in the early days of the band U2, Larry Mullen was pictured wearing a jean vest with an orange button with a green “DA” printed on top. Now you know the rest of the story.

Were this a single release with the refreshed Horrendous Disc alone, the purchase would be worth it. There’s a reason why the band’s fans obsessed over this title, and it was not merely because of its rarity. The sound quality renders all other releases of the title permanently irrelevant. But then, you also get that other disc which acts virtually as a brand new Daniel Amos album. And then you get the album of odds, ends, demos, and live cuts, much of which is unique to this set. That is a lot of value to ask from a “lost” release, and the band delivers it in droves.

If you are a fan of the band, you probably bought the set already through its Kickstarter. If you aren’t, now might be a good time to give it a test run. You’ll never get a better example of a fully realized passion project than Daniel Amos’ Horrendous Disc Ultra Deluxe CD Edition.

This set is available at http://danielamos.com/store/