For decades, and especially at the beginning of the Rock phenomena that many of us find a way of life these days, there was Joan Baez. Her first album was released back in 1960, a light-year of time ago for many of us. From there, her fame grew. By 1970, she had a strong hit with a cover of The Band’s “The Night They Drove Old Dixie Down”. Her version is still considered a strong version of one the great singles of all time.

Over her lifetime, Joan Baez has released over twenty albums. During the ’60s and ’70s, many of her sets were consistently charting high until time and the political environment had found little use of her activism and voice. Great albums like Diamonds & Rust (1975) were incredible productions. Regardless, as legend, Joan Baez continued to tour, record, and release new music. Her last album, Day After Tomorrow (2008), charted respectably.

On March 2, Joan Baez will release her newest album, Whistle Down The Wind. It is a mix of covers and originals in a collection of ten songs. Two tracks (including the cover song) were penned by Tom Waits and Kathleen Brennan. Another is a Mary Chapin Carpenter song (“The Things We Are Made Of”) done in the inimitable Baez fashion. Listening to the title track, I feel confident that Whistle Down the Wind will be a beautiful Joan Baez addition to a strong library. 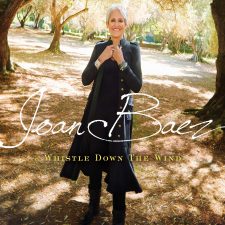 Whistle Down The Wind will be released on CD and vinyl LP, as well as in the DD format.

Whistle Down The Wind – Joan Baez