Rick Wakeman To Release New Album – The Gallery Of The Imagination

Rick Wakeman is best known for his time with YES, and his solo outings. And yes, there is that time with Strawbs. Along with a few others, he is considered one of the finest keyboardists in Rock history. He has approximately 15 or so solo sets available, some of them best-selling classics. These days, music from artists such as Rick Wakeman are done as a means to deliver personalized music rather than trying to create a hit following some “rules”. That’s the gist of his newest album planned for February (but Rick’s site claims the CD is shipping before Christmas. All other pre-orders, which will not be available until February will get a link to DD by Christmas.).

On February 24, Rick Wakeman will release his latest album, A Gallery Of The Imagination. Designed from a memory instilled by his music teacher from the age of 5, this latest set builds on that concept providing 12 new tracks. In addition to the standard issue on CD, there will be high resolution Stereo and 5.1 Surround that can be had. He co-bills with The English Rock Ensemble. 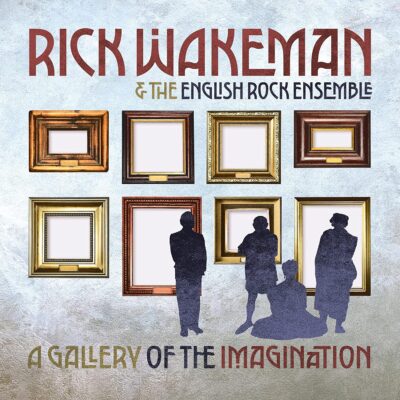 A Gallery Of The Imagination will issue on CD, DD, CD/DVD Deluxe, 2LP (both black vinyl, and Silver color vinyl, both 180g-weight), and a Super set that packages together CD, DVD, and LP (black), along with a 24-page book. You can pre-order any variation here, including signed editions.