Sex Pistols Vinyl Single Classic, “God Save The Queen”, To Be Reissued

When Sex Pistols were signed to a major label at the climbing of Punk as a music force, they managed to have one label expunge them from their roster due to the shock of behavior. But when one label changed their mind, another stepped in to take the challenge. The second single was “God Save The Queen“. It went on to become a highly sought after single (I actually had one, purchased from Peaches Records in St. Louis from their international import single. And I lost it.) These days, the vinyl single issued by A&M Records is a coveted find, often selling for over $22,000. Virgin Records ended up being the distributor for the band and their album.

On May 27, in celebration of Sex Pistols‘ controversial (and UK-banned) single, there will be a limited UK vinyl single repress of 4000 copies of “God Save The Queen” featuring the Virgin label. The B-side will be “Did You No Wrong”. An additional 1977 copies of the single will be issued featuring the A&M label with original B-side of “No Feeling”. 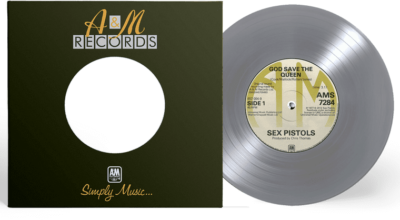 These are both being reissued to recognize the fact that the single debuted during the Queen’s Silver Jubilee in 1977. The release comes on the heels of the Queen’s Platinum Jubilee.

On May 31, the Danny Boyle dramatized series production of the Sex Pistols arrives.