With only two studio albums into their career, ELP released a live set on the tail of their 2nd album (Tarkus) with Pictures At An Exhibition. Not long after that, the magnificent and quite ambitious – if not overcooked – live display was the band’s Welcome Back My Friends To The Show That Never Ends…Ladies and Gentlemen, Emerson, Lake & Palmer.  Yes, that’s quite a title…but that’s who ELP was…quite a live band. They were heavily invested in the Progressive mixture of classical, Rock, and the occasional folk tale. But nevertheless, ELP did it all with excellence. And we loved them for it during their initial and somewhat short-lived 8-year career. But they left behind a legacy that still does good business today. 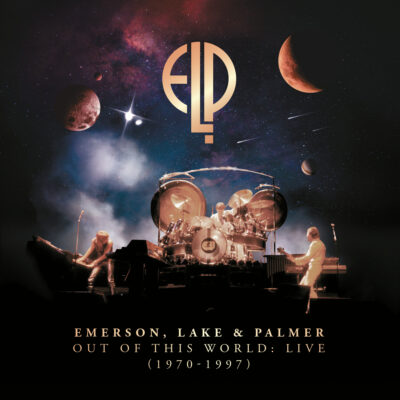 The 3-member band, which is sadly two members gone at this writing, was a dramatic force. With live albums, the ELP catalog is full to the brim. But if you’re an ELP fan, what’s a few more if they proudly add to the collective brilliance of their collected shows, some of it from their peak period. That’s what Out Of This World: Live (1970-1997) provides to the genuine fan. And no, it’s not for the average fan. It’s for the lover of the band.

Out Of This World: Live (1970-1997) offers 5 separate shows that bring together into one box a nice overview of their creative abilities. Three of the shows are from the ’70s. Those include Isle of Wight on August 29, 1970, the singular California Jam set from April 6, 1974, and Works Live at the Stade Olympique de Montréal on August 26, 1977. The other two sets include The Royal Albert Hall show in October 1992, and a previously unreleased Union Hall show in Phoenix on September 23, 1997. All of the shows have been remastered for this package. 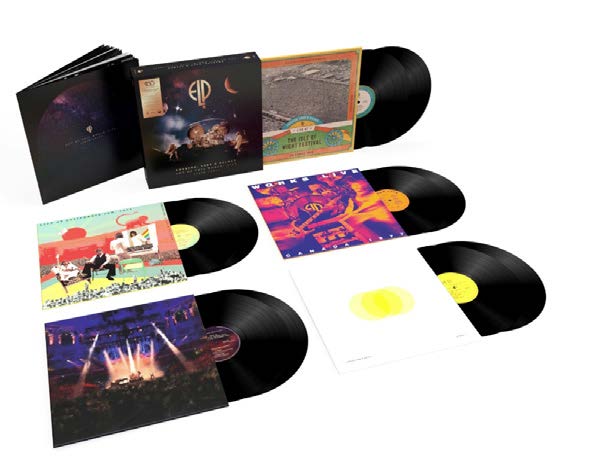 I have the 10LP Box because I’m a HUGE fan of Emerson, Lake & Palmer. And I like vinyl. If you find yourself in both of those categories, then it’s easy for me to recommend Out Of This World to you. Understandably, I enjoyed the ’70s shows best. There a feeling like a bit of magic in them. If I have an issue, it’s a usual one where I’m a little upset that favorite songs were not included during their peak. Songs like “From The Beginning” that doesn’t show up until 1997 show in Phoenix. But even then, they didn’t leave too much out of the delivery.

The included 32-page booklet provides a collection of photos from different shows that are not included on the discs. There is a nice write up by Jerry Ewing that begins with “ELP could rock!”. And they could. While live sets like Pictures At An Exhibition, Welcome Back My Friends…, and Works Live (previously released as ELP In Concert) are essential, Out Of This World is an excellent add to the extensive ELP library that you may have accumulated.