Sometimes, a release happens and it slips past your radar. I’m a big fan of Dead Can Dance, and any offshoot of the core of Lisa Gerrard and Brendan Perry. Recently, we were aware of the upcoming Lisa Gerrard collaboration with Jules Maxwell (Burn, here). By coincidence, I did a search and discovered that Brendan Perry released an album late last year. For this, I offer my apologies to DCD fans who were still unaware. 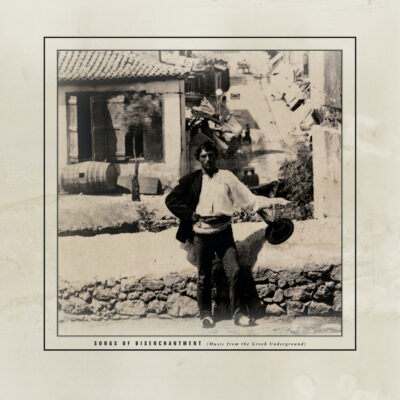 Back on November 20, Brendan Perry released a brand new album called Songs Of Disenchantment: Music From The Greek Underground. And yes, it’s as gorgeous and exquisite a recording of ten tracks as you’d expect from Brendan Perry. This album was released digitally via Bandcamp. What will make this post valid is that CD and vinyl LP editions are planned for the Spring of 2021. The vinyl LP will be limited edition. If you were unaware, then I’m glad to be the one to bring it to your attention. If you already have it, then that’s awesome.

REVIEW
Upon listen, the album retains the explorative nature of Brendan Perry, an element that contributed heavily to the authenticity and originality of music from Dead Can Dance. Being well aware of the nuance of each of his instruments that he plays, the melodies and detail brought forth from them are at their near best. I can’t testify as to the instruments used or their history in the old, old flow of music, but I can say this: it satisfies me much. Dead Can Dance explored a world of ancient music and instruments within the collection of their released music. It’s therefore no surprise that Brendan Perry elected to devote an entire album to the street and bar music of Greece. And that’s what it sounds like. If you entered a bar in Greece, it’s probably the played music of the local band.

Much of the music sways from high celebratory happy music to the soft and mystical. If you’re a fan, you’ll have zero problem navigating the deliriously great music in this album. You can stream  the full album at Bandcamp (here), or from one of your own subscribed sources. You can hear “Bring Me A Cup Of Wine” and “Christos, Play The Bouzouki” below as YouTube audio. “Bring Me A Cup Of Wine” is a perfect blend of music with a decidedly radio playability. “Christos, Play The Bouzouki” has an eternal charm to it. Hesitate not as Songs of Disenchantment: Music From The Greek Underground is clearly an enchantment!

Songs of Disenchantment: Music From The Greek Underground – Brendan Perry
01 Bring Me A Cup Of Wine
02 Gypsy Girl
03 In The Basement
04 The Hash-den Owner
05 O Memetis
06 In The City’s Hammam
07 Tonight In Your Neighbourhood
08 You Were Barefoot
09 The Pickpockets
10 Christos, Play The Bouzouki