Review: The Zells – “Failure To Slide”

The Zells, the newly rechristened Pittsburgh garage-rock quintet f.k.a. Denzell, has a new record out this Friday via the fine folks at Crafted Sounds and, man, is it a doozy. 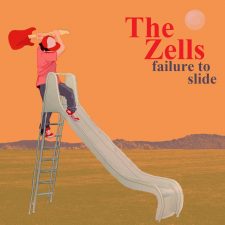 In terms of the method and initiation of the band’s 13-track full-length debut, Failure To Slide calls to mind Pavement, for sure, with all of its sloppy edges and verse/chorus/verse college-rock aspirations. But, to write it off as another paean to the mountain of Malkmus is short-sighted and plain wrong. The Zells has a decidedly more punk-rock outlook than Pavement did in its heyday, and that’s a good thing. They’re not art-damaged; they’re just damaged. The record, in turn, ends up being the kind of punk specialized by bands like Dead Milkmen – snotty, sloppy and fun – but also a byproduct of the alt-rock of the 90s, mostly noticeably the Weezer hooks and the Ween quirkiness.

This isn’t to say the guys in The Zells aren’t their own men, far from it. Gems like “Drive Me Home,” with its gnarled vocals over aggressively spat-at guitars, put them in the company of trash rock comrades like Pittsburgh’s The Lampshades in the originality column – and that’s saying a lot. (I mean, have you heard Astrology?!) It’s not that this song, or any other for that matter, is rewriting the rules of the genre; it’s just that it nails the strut and then some. The anthemic “NBC Sitcoms” is endlessly, endlessly fun, the kind of track you blast out of your car window in late summer as you’re cruising down Forbes or Fifth. (Ditto “You Must Choose.”) “Oh, The Things You’ll Do,” with its winnowing guitar solo-age and looping electronics, is one of the record’s more ambitious tracks – and the one most custom-crafted for a John Hughes movie. “Soft Reset” reeks of Sonic Youth.

The record, in short, is a raucous, well-worth-the-investment good time, the sort of LP that replicates the energy and vitality of a great garage-band’s live set at the local pub. The Zells came out swinging last year with its Tour Tape EP, and Failure To Slide delivers on all of these guys’ potential. Like I said, just the thing you need playing from your dashboard while the windows are stilled rolled down.