I don’t know what to make of Sam Beam’s latest outing, an Iron & Wine EP titled, cleverly if mockingly, Weed Garden. (It was released a few days ago on multiple formats by Sub Pop.) 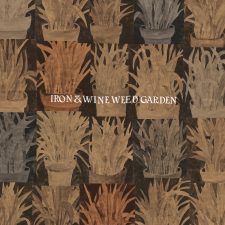 In some respects, it’s very easy to hear how much of this material was coaxed into existence around the same time as last year’s Beast Epic, which was a kind of return to less ornate fare for Beam. The new tracks are, indeed, far removed from Iron & Wine’s Warner Bros. years. But Beast Epic, for all its charms, was a deceptive little disc – at once very produced and very organic, an interesting melding of able musicianship and able studio production. It was not a Lomax field recording, we can say that much, and to say otherwise is to fall into the traps laid by such “understated” production goo.

Weed Garden – all new material, aside from the years-old, live staple “Waves of Galveston” — is a little more straight-forward about being a slightly produced affair. The scraping cello and ghostly piano of “Milkweed,” not to mention all of those backing vocals, are so high in the mix and prominent, if there is Beam’s trademark acoustic guitar keeping time it’s lost on listeners entirely. But that doesn’t make it a bad song – in fact, I thought it featured some of the better moments on the EP. It packs an emotional wallop, despite or because of the ear for how it’s presented.

Then, there’s the closer, “Talking To Fog,” a carefully polished gem that is all about Beam’s almost-breathless delivery in its closing verses. For a man at his best when he keeps a cool, composed delivery, the song ends, stripping away many of the other details, with Beam nearly rambling off the lyrics, passionately and lost in the thick of it. Interesting, indeed.

I can take or leave the rest, though. The faux-acoustic-funk “Last of Your Rock ‘N’ Roll Heroes” is interesting but largely disposable, not as heartfelt as what surrounds it and not light enough to be written off as a bit of comic relief or wonder. “Autumn Town Leaves” is beautiful but forgettable.

Again, this is an EP, a between-projects affair and, in that respect, it’s an accomplishment and an accomplished recording, managing to transfix, if only for a little bit of a shorter running time. But it does not signal what’s coming next for Beam and it does little to build on the mystique of what came before it. That’s a tall order, of course, never mind for someone as sure on the delivery as Sam Beam. But, for all of the expectations, I’ll take it as is.