There are musical injustices in this world where the band or artist is underappreciated and, in general, underexposed. The band that -sadly – comes immediately to mind for me is Shoes. Shoes arose from Zion, Illinois as a Power Pop band. Formed by two brothers and their friends back in 1973, the band recorded and released a small set of albums and cassettes on their own established private label (Black Vinyl Leather) before being signed by Elektra Records for three ‘prime-time’ albums including the extraordinary Present Tense (1979). But after all is said and done, this band left behind a treasure of over fifteen studio sets, a feat not lost on UK’s excellent reissue label, Cherry Red. 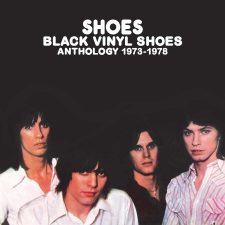 Cherry Red has released a 3CD Box set that is comprised of the band’s pre-Elektra albums, namely their first three privately-issued albums including a nice collection of bonus tracks to complete the release. Without saying more accolades than I should in a review, it should be realized that the band is worth your listening time. This is especially true of the Power Pop of the late ’70s were to your liking. These include bands like Chicago’s PezBand, and the Cliff Johnson (also from PezBand) project, Off Broadway, who enjoyed a nice but short measure of success with the release of On (1979) and its single, “Stay In Time”.

The music found on these reissued CDs within Black Vinyl Shoes – Anthology 1973-1978 are sounding well. They not only reflect the musical brilliance of the band and their earlier music before Elektra, they enhance the audio quality. If you’re aware of Shoes, then this is likely already in your collection, as it should be. With the addition of appreciated bonus tracks, including the Bomp! Version of the later used “Tomorrow Night” (on Present Tense), the set becomes essential in its display of the greatness of Shoes, a reality little known.

The booklet’s collection of photos, credits, and the insightful essay by David Wells adds to the collection to make what is an easily identifiable necessity in any Shoes library. If you’re unaware of Shoes, or the genre that they recorded in with its rich array of bands, some earlier mentioned, then this is a great introduction to a band that not many but a devout few were aware of.