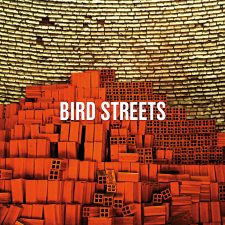 Bird Streets is the nom du disque of musician John Brodeur on this project with Jason Falkner (The Three O’Clock, Jellyfish, etc. and many fine solo albums).   It’s a fresh mix of power and jangle pop, coupled with anthemic choruses and clever lyrics.  Brodeur’s warm tenor sounds familiar yet distinctive.  Some of the conrtibutors to this collection include the remarkable Luther Russell (ofThose Pretty Wrongs with Big Star’s Jody Stephens) and Miranda Lee Richards.  Something of a labor of love, it’s a creative rebirth for Mr. Brodeur, after years of working on the music industry’s periphery and this self-titled album is the fruits of their labors.  For those who dig on details, the name come from a real estate enclave in the Hollywood Hills, where recording began, but also makes reference to Mr. Brodeur’s once-hometown of Albany, New York, which provided the characters and inspiration for some of the album’s tracks.

The pulsing throb and two guitar interplay of “Carry Me”, tempered by the celestial harmonies are an immediate wake-up moment to start this album.  The guitar mix cannot be understated as you can clearly hear the two instruments separately, yet the blend of the two weave around one another perfectly.  A very late ’70’s type of power pop track, it’s the first standout.  The shimmering acoustic guitars on “Betting On The Sun”, the melodic structure and subtle organ undertow makes this a perfect radio single (a theme I admittedly harp on, since radio has been neutered).  The “sunniness” of the music belies the contradictory nature of the slightly cynical lyrics and makes it even more meaty; “Stop To Breathe” is another in that ’70’s vein, albeit slower and more “rock”, with skewered riffs and a very anthemic feel – listen to the call and response on the choruses.  “Thanks For Calling” is a perfect melding of ’60’s structures, tempo and melody (listen to that very Byrds-y guitar) and is another highlight; “Same Dream” is a runaway train with a mix of acoustic rhythm guitar and a riffing Rickenbacker (to these ears) – it has the intensity of very early R.E.M. and a completely unexpected yet on-the-one solo.

In a time when records like this can still be made, it is of the hope that Bird Streets does not get overlooked, as it’s radio friendly, accessible and just plain good.  A tight, fully-realized collection of 11 songs that keep you interested, gripped and listening for more.  Which is a win.

The self-titled album is out now on Omnivore Recordings