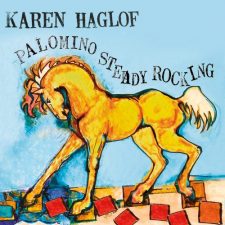 Palomino Steady Rocking is the third release from New York-based guitarist/oncologist (yes, you read correctly) Karen Haglof, who has played with such luminaries as Rhys Chatham and Band Of Susans.  She’d put music on the back burner for quite a while, as she focused on her medical career.  After being reignited by seeing the documentary, “It Might Get Loud”, she picked up the guitar again.

2014 saw the release of Western Holiday and from there, she’s worked with the same incredible (to me) team of players, producers, etc.  Case and point:

– this 4 song E.P. was recorded, as her other releases, at Del Lord Eric “Roscoe” Ambel’s Cowboy Technical Services Recording Rig in Brooklyn (and engineered by Mario Viele)

– it was mixed, as was the other two albums, by Mitch Easter at his Fidelitorium in Kernersville, North Carolina (who also adds Moog to  the proceedings)

–  it was produced, as previously, by Suicide Commando/Beat Rodeo/songwriter extraordinaire Steve Almaas, who once again plays bass and guitar with C.P. Roth on drums

When you have a winning triad like this, you don’t need to change the formula.  And there’s a concept here, even though it’s only four songs:  they’re all about horses that Ms. Haglof has either known and loved – or imagined (!).

“Ode To Bon Jovi” comes crashing in with a knock-you-out rhythm (listen to that pulsing bass); upbeat, yet simple and with a warm slyness in Ms. Haglof’s vocals.  The Moog lines that float in and out have a very ’70’s ethereality and it just helps this song GO.  The title cut, “Palomino Steady Rocking” has a bluesy, late ’50’s vibe; that cool jazzy kind of shuffle, a very crisp and taut guitar (vintage tube amps?) and an on-the-one solo that brings it all home.  “Slow Stampede” is an old-fashioned country/rockabilly-styled piece with clean guitar lines and a lot of space in the sound, which I love while “Snakebite 2” is, at first, a quiet acoustic piece that somewhere around the second minute goes into an complete rock & roll rave up and then stops – returning to the quiet of the earlier verses.  It’s quite a track and perfect way to end the balance of this E.P.

MusicTAP.net will stream the four songs on Thursday, September 6th, in anticipation of release on the following day.  Once you hear it, you should quickly understand why you need to pick up this spirited and joyful collection.

Palomino Steady Rocking will be released on Friday, September 7th, 2018