On the third release of Alice In Chains’ “Mach 2,” the band has locked in a win. 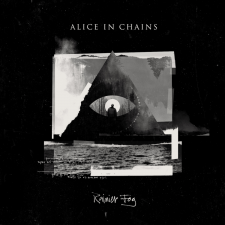 It wasn’t guaranteed, not by any stretch. While I liked their first in this configuration, Black Gives Way To Blue (2009), I felt like the band intentionally tried to reckon with their past rather than accept a new future. Nonetheless, it was a fine start for a second act. The follow-up The Devil Put Dinosaurs Here (2013) was subversively political, which turned off a lot of the faithful who could not get past the weird name. It arrived four years after the previous record, and with such a churn commencing within that space, I can only assume people wanted a kind of “Black Gives Way 2 Blue,” which is absolutely what they did not get.

Five years and a new record label later (the reconstituted BMG), Alice In Chains return with Rainier Fog and don’t let the murky, moody cover image fool you. The band offers up one of the most hook-driven, accessible offerings they’ve ever concocted, in either AIC format. There are actually songs you can sing along to on this set. That’s not to suggest they’ve gone totally soft. Co-lead and guitarist Jerry Cantrell still keeps things craked up most of the time, but there’s a renewed sense of melody at play on Rainier Fog that Dinosaurs largely eschewed.

Case(s) in point: The songs “Fly,” “Maybe,” and “Never Fade” have big choruses and have upped the ante for the huge wall of vocal harmonies that set AIC apart from their alt-90s counterparts. The band thoroughly gels here. Vocalist William DuVall’s voice mixes with Cantrell’s in interesting ways. It is often said by reviewers that the blend is so thorough that you can’t easily discern where one voice begins and the other ends. That is certainly true of the choruses on this album where the singing has a hypnotic, sharp edge that listeners can get lost inside of.

Mike Inez and Sean Kinney provide the rhythm section firepower that has underpinned the band for so many years and likewise has been unfairly disregarded. There’s so much happening over the top with DuVall and Cantrell that it becomes easy to miss what they are doing, how they lock with the songs and rein them in when things threaten to go off the rails. Even at its sludgiest, their groove propels AIC.

That is an attribution frequently pinned to Alice In Chains, that they are an example of “sludge metal,” that variation of down-tuned, doomy, early-Black Sabbath-like gazing into the void. I’d like to look at this in a different way, however. Yes indeed, when they get heavy, they get really freaking heavy, but at the heart of this band is – dare I say it – a country sensibility?

I await your derision but hear me out. Take Rainier Fog‘s “Fly” as the illustration of this. There are the acoustic guitars nestled in the mix which are revealed in full at the chorus. There’s a hint of a slide in the electrics. Again, there’s the three-part vocal harmony. The lyrics, focusing on surviving disillusionment, have a lot more in common with the hard-times ballads of older country music than that genre’s modern counterpart is able to muster. If producer Nick Raskulinecz dropped out a fifth of the heaviness in the overall mix, that’s what you might wind up with.

And that’s not a bad thing. In fact, it makes this latest iteration of Alice In Chains that much more interesting, suggesting there’s a very Americana heart amid the swirl of power chords and thundering rhythms.

The band will always have to reckon with where it began. The ghost of Layne Staley will always be at the fringes, and the electric junkie ballads that first built the band up will always be requested in concert. I want to posit that, having survived that rock and roll Babylon, along with a litany of copycats that only picked up AIC’s most obvious traits without the benefits of the subtler ones, this iteration is tighter, more intriguing, and has more to offer. Rainier Fog becomes the dominant example of why this should be the case.