Talk about a phoenix rising from the ashes of it all, am I right? 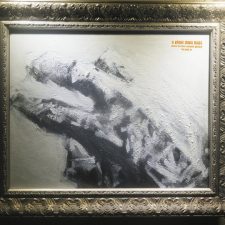 Consummate post-rock guitarist David Pajo returns to excellent form on A Broke Moon Rises, a new five-song mini-LP released a few days ago via Drag City. The record comes less than two years after Highway Songs, a confusing mish-mash of odds and sods that didn’t crystallize into a full vision, an inconsistent mélange that, oddly enough, wore its inconsistencies proudly. And god bless him for this new record! A Broke Moon Rises is a fragile heartbeat-flutter of a thing, airy but agile and highly emotional, a series of suites for acoustic guitar that turns some of the conventions of math-rock right on their heads.

All you really need to know about the new LP is that Pajo closes it with a faithful cover of Arvo Part’s breathtaking “Spiegel Im Spigel,” where notes sort of float in metronome paces into a kind of lullaby-drone. The rest follows suit, with Pajo’s acoustic guitars, ever layered, sowing sweet lullabies between carefully choreographed syncopations. Unlike Papa M Sings, another acoustic mini-LP, though, this is no folk record, no collection of shuffled ballads; instead, more like Pullman’s debut (on which Pajo played), it’s a compendium of careful calculations, a pace tread at night alone in the rain.

The verdict is out on the best track but it’s hard to do better than “Shimmer,” a haunted, six-minute-long series of bridges that ebb and flow rather than sticking to the molds of verses and chorus. When this thing ends, you just find yourself longing for more. The same could be said of “A Lighthouse Reverie,” where Pajo layers and layers palm-muted guitars with occasional notes being hammered out, providing a kind of hidden melody. Or the opener, with its plodding sense of remorse. Or just about anything herein, really.

Let it be said for those expecting Shark Cage or Mortal: there’s very little on the record but layered acoustic guitar. Gone is Pajo’s voice, somewhat literally I presume, and even the touches of drums are sporadic and occasional – opener “The Upright Path” uses spare kick-drum and hi-hat to endearing effect, and the cleverly titled “Walt’s” throws in a little bass and slide, for good measure.

Yes yes it’s true, Pajo has not made a brilliant Papa M record now for more than 15 years – that record being 2001’s Whatever, Mortal. A lot of that has been his assorted “duties:” Slint reunions, the ill-flated Zwan, solo outings under his last name only, occasional touring with Stereolab. Aside from the brilliantly underrated tour EPs, circa ’03, this might, in fact, be the best thing Pajo’s done in years. Call it a return to form, if you will. (I will.) Pajo’s always teetering on the edge of something breathtaking and, on A Broke Moon Rises, he thankfully plunges into the deep and embraces it.