50 years ago, the Byrds (once royalty of rock) were down to two of the original members (Chris Hillman and Roger McGuinn). Chris started out in Bluegrass, while Roger was deeply rooted in folk. On the heels of The Notorious Byrd Brothers (a critical favorite with elements of jazz, electronic, country, and folk, but was a commercial failure), the duo was looking for a new direction. Roger McGuinn originally wanted this to be a 2 LP compilation of American music from traditional folk through hill music, country, jazz, rock, and electronic. While the Byrds had dabbled in country influences on four of the first five albums, that concept was undone with the hiring of Kevin Kelly (Chris’ cousin) and Gram Parsons, “a piano player that turned out to be George Jones in a cowboy suit”. The group went to Nashville to begin recording with an A-team of country studio players. The musical direction shifted to country with a hint of Byrds.

Sweetheart of the Rodeo was a significant departure from the Byrds signature 12-string guitar sound. The album reached 77 on the Billboard charts and failed to chart in the UK. Rock purists hated it because it was too country. Country purists hated it because it was too “rock and roll”. They were booed at the Grand Old Opry. Generally, the critics hailed the album, but the lack of any real commercial success ultimately forced a rift between Hillman and McGuinn with the former working with Gram Parsons in the seminal Flying Burrito Brothers, and McGuinn enlisting studio musicians to continue as the Byrds for another five albums (that featured the extraordinary guitar work of Clarence White). The Burritos went on to further bridge the rift between country and rock while the Byrds transformed into a killer live band (with no shortage of classic songs). In 1972 all of the original Byrds took a hiatus from their current bands to record the underrated “Byrds”.

Cut to 50 years later, McGuinn and Hillman announced a reformation tour to help celebrate the 50th Anniversary of the Sweetheart of the Rodeo album (now considered to be a seminal and highly influential country rock album). It started small but has now grown to become a national tour. They enlisted the support of Marty Stuart and his band of Superlatives to help flesh out the arrangements of the Sweetheart songs.  The tour kicked off at the Theatre at the Ace Hotel in Los Angeles on July 24, 2018. I was fortunate enough to be able to attend this concert with my son (who probably still harbors some resentment of my Byrds saturation as he was beginning to develop his own musical perspective). It’s been over 30 years since I heard any of the Byrds songs performed by a live band (many times in solo concerts, but they lacked the power and intensity of a full band). This night did not disappoint.

• McGuinn and Hillman were clearly having fun and feeding off the enthusiasm of the crowd
• Stuart’s musical virtuosity was on clear display. At times, I could close my eyes and hear the ghost of Clarence White on the string bender (Stuarts owns White’s Fender Telecaster that is famous for a spring mechanism linked to the guitar strap peg…a bend of the shoulder causes the B string to bend creating a pedal steel effect).
• McGuinn was in rare form on the high harmonies (interesting note here…Gram Parsons vocals were lead in the recorded versions. However, it was determined (just before the album went to pressing), that he was under contract to another label. McGuinn had to overdub Parsons’ vocals for the final release. Subsequent releases of the Parsons tapes reveal a decidedly superior version of the original release.
• It was fun watching the crowd. Old hippies, old cowboy shirts and costumes, and a surprising number of younger folks dancing and singing along (a personal note about how nice it was to see a crowd clap in the right rhythm (unlike any Voice crowd).
• Marty Stuart is a musical genius. The Superlatives are immensely talented. The pedal steel for the SOTR songs was especially poignant.
• The theatre at the Ace Hotel is trippy. The pervasive hint of marijuana had nothing to do with that comment.
• It was great seeing Roger and Chris back together in a band format. Without the responsibility of being a front man, they were at ease and having fun. As the bootleg title of the reunion of 4 Byrds in 1978 suggests, they were “Doin’ Alright for Old People”. 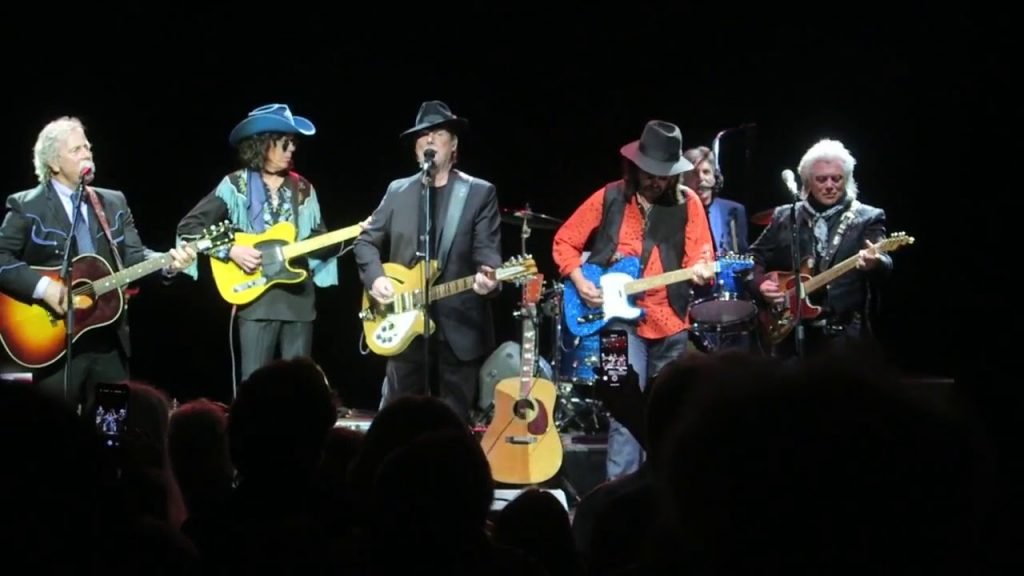 I was in heaven for two hours plus. I was hoping (against all hope) that David Crosby might make an appearance. Alas, it didn’t happen. Maybe later on the tour? Maybe a film of the tour? In any event, this was the best Byrds-related concert I have ever seen. It made me wish there was some alternative universe where all of the players could have collaborated over the years. In any event, here’s the set list with some commentary:

My Back Pages: The band entered with the familiar 12-string intro. The performance was extraordinary and is notable for the best McGuinn version of the solo I’ve seen in years. The standing ovation at the end of this song brought a tear to my eye.

Satisfied Mind: An old Porter Wagoner song from the Turn Turn Turn album. Stuart did an incredible reading of this song supplemented by Hillman’s and McGuinn’s harmonies.

Time Between: Firs song that Hillman wrote for Younger than Yesterday.

Old John Robertson: From Notorious Byrd Brothers…Chris sang the updated version from his recent solo album, Wasn’t Born To Follow. This one blew me away with Roger and Marty using phase shifters during the break.

Sing Me Back Home: The “other” song from the Opry performance. Chris’ vocals were as soulful as Gram Parsons’ on the Burritos version. I had never seen this one live before.

Drug Store Truck Driving Man: Great story that led to the writing of this song. Marty artfully channeled Clarence White. Kind of surprised they included this since it appeared on the 1st “post Byrds” album “Dr. Byrds and Mr. Hyde”.

Mr Tambourine Man: The one that started it all had me waiting for Crosby to step out of the wings. Clips of the Break song from Dr. Byrds closed out the first half.
– intermission-
Country Boy Rock n Roll
Time Don’t Wait: Stuart and the Superlatives just tore it up with these two songs. They were simply chewing up bits of Byrds riffs. Incredible group that I need to look at more closely.

You Ain’t Goin’ Nowhere: And so it begins. Stuart became Clarence White for the intro. Great vocals and harmonies with Roger, Chris, and Marty trading on the verses. I was kind of hoping they would slip in the “…pick up your tent, McGuinn” line where he dissed Roger for screwing with his lyrics. They didn’t.

Hickory Wind: I didn’t think it was possible that anyone could eclipse Parsons’ vocals on this classic, but Chris brought the experience of many years on the road. Roger’s high harmony was spot on. Pedal Steel = awesome.

100 Years From Now: My favorite on the album. It seemed, at the time, that it was the perfect fusion of the Byrds sound and country. They did not disappoint tonight.

Nothing Was Delivered: This one turned out to be the highlight of the night. The pedal steel dominated, the vocals shone.

Christian Life: McGuinn’s vocals on the album were cynical and satiric. Now, many years later, after embracing Christianity, he sang it straight and it became a different song. You could tell that it meant something different to Roger and Chris than it did 50 years ago.

You’re Still On My Mind: Marty vocals…one of my faves from the album, he made it sound like an old country staple…”An empty bottle, a broken heart, and you’re…”

You Don’t Miss Your Water: Roger delivered a poignant vocal on this old country standard.

I Am A Pilgrim: Chris delivered a beautiful rendition of this old spiritual.
You Ain’t Goin’ Nowhere (audience sing along): One side of the audience singing Roger’s part, the other half doing Chris’. Just a helluva lot of fun watching Roger’s inner Pete Seeger.
-encores-
So You Want to be a Rock n Roll Star?: Always fun being a part of the screaming audience.

American Girl (w/Mike Campbell): Bit of surprise here, especially with the appearance of Mike Campbell from the Heartbreakers. Tom Petty was definitely in the room tonight.

Wildflowers: Chris soloed on this. You could tell how much he admired and respected Tom Petty. A really special moment.

Running Down A Dream: Marty led on a bluegrass version of a Petty song.

Turn Turn Turn: Given all the chaos around us today, this was an especially appropriate close to the concert. I’ve heard TTT a million times but the “…a time for peace I swear it’s not too late” just hit hard.

Tomita: Why Don’t We Have Definitive Box Sets For Him?