I feel much better about this now. I’ll explain why momentarily, but first, a little background. 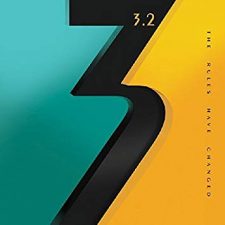 Released in 1988, …To The Power Of Three, the debut of the group 3, came at a tumultuous time. The 1980s represented a great moment of acceptance for progressive rock, provided it leaned a little harder toward the mainstream. Audiences saw bands like Yes and King Crimson gain acceptance. Genesis became a chart-topping powerhouse, as did former frontman Peter Gabriel.

However, for all the newfound interest, there was also significant fragmentation. Carl Palmer left ELP and joined Asia with John Wetton (King Crimson, U.K.), Steve Howe and Geoff Downes (both Yes). Howe would later leave Asia and join Steve Hackett (Genesis) in GTR. While Palmer was away with Asia, Keith Emerson and Greg Lake joined up with drummer Cozy Powell (Rainbow, Whitesnake, Black Sabbath) for a new iteration of ELP. After most of this shook out, 3 arrived Emerson and Palmer joined by vocalist/multi-instrumentalist Robert Berry.

Things had already changed a great deal by 1988. Guns ‘N’ Roses, the resurgent Aerosmith, and upstarts like U2 and R.E.M. were once again moving pop music in new directions and progressive rock inched back to the margins. Although …To The Power Of Three was a noteworthy bit of AOR rock with long strands of prog interwoven into it, it was not accepted by a large audience. It would be the only official studio album from 3. Not long after, Emerson, Lake, and Palmer reunited for Black Moon.

Both Keith Emerson and Greg Lake passed away in 2016, and it would seem that, aside from Carl Palmer’s efforts, that was the end of the story. So you can imagine the trepidation I felt when I read about a forthcoming 2018 album by 3.2 entitled The Rules Have Changed. The press materials hailed the return of the group, now centered on Robert Berry, with input from Keith Emerson.

Such things put me on edge, which is never a proper starting point with any recording. You should be able to approach a record without baggage getting in the way, like questions of, “Would the deceased member of this unit have approved?” I suspect that Freddie Mercury would have been fine with Queen’s Made In Heaven. I don’t know how Rick Wright would have felt about his posthumous tribute such as Pink Floyd’s The Endless River was. I still feel angry about Boston’s Life Love & Hope. It was released in 2013, well after vocalist Brad Delp’s suicide in 2007, and his contributions appeared via demos, unfinished tracks, and rewrites of previous songs. I will not belabor the point but conclude that, if he had the ability to raise an objection of his voice being summoned from the dead through leftovers after his most tragic demise, I think he’d have done so strenuously.

Would Keith Emerson have approved the resurrection of 3? Fortunately, that question is largely muted because, even though Emerson had input and writing credits for half of the record, Robert Berry is credited as the sole musician. The extensive liner notes by Berry indicates that the writing process with Emerson was with the goal of actually recording the music, not as a speculative exercise. Emerson, however, never recorded a note. Is the repurposing of an idea more acceptable than the repurposing of a recorded performance? I think so, especially if that had always been Emerson’s intention and Berry was seeing to fulfillment that effort. I think there is a distinction to be had here, one that others might balk at.

This is a long way around to finally arrive at the salient question: is the album any damned good?

Short answer: yes. 3.2 works as a sincere tribute to Emerson as well as a sort of redemption for Berry who took an awful lot of stick from longtime ELP fans for presuming he could fill Greg Lake’s shoes. The truth is that 3 never really was trying to be “EBP,” as it leaned a lot more into the pop-AOR genres than ELP had up to that time, but try telling that to people who had already made up their minds.

Long answer: The Rules Have Changed is a very good record but nonetheless occasionally gets bogged down by its one-man-band status. Berry has the chops and still has the voice. This is, in most respects, a worthy successor to his vocal performance on …To The Power of Three. Even so, sometimes the compositions get chaotic, and to my ears not always by choice. The back quarter of opening track “One By One” seems to run into itself and confuse the listener. I recognize that this is partially the aim, but I don’t feel that there was enough control exerted over the process to indicate that, yes, there’s a lot happening here at once, but it’s by design. It’s nowhere near enough to sink the song. There are further points in the record where things can sound a little thin, where an independent producer would have stepped in and said, “Robert, maybe we need another take there.”

These are really minor quibbles in the big picture, which is that Berry has offered up a tribute that does what it is meant to do. The title cut, “Our Bond,” and “Somebody’s Watching” all deliver on the promise of the continuation of 3. Overall, the album is far more progressive in tone than even that first record was. Berry gets Emerson’s sounds right. The big organ, the Moog, the synth textures one associates with Emerson are on display. Berry is not as muscular a player as Emerson, and I think he’d be the first to admit that, but he is accomplished in his performances.

If you remove the history and take the former and latter 3-related albums together as entries from this group (with ignorance to who is in it or where they came from), there is sufficient continuity and good songwriting to say that there is a true extension of the concept. Berry’s heart is in the right place, and the results are worthwhile.

In the end, if you still hold a bias against the first 3 album, 3.2 is not going to suit you. If, however, you have an open mind to this and are willing to give this solo configuration a try, you’ll be pleasantly surprised. I was worried about how the legacy of Keith Emerson might be misused after his death. Clearly, so was Robert Berry. He has proceeded with care and respect and has managed to make an album that evokes the dead but doesn’t invoke their ghosts.