Review: Noemienours – “As A Beare Doth Her Whelps”

The German guitar-composer Noemie Dal on Sept. 10 will release her third outing, a Bob Weston-mastered LP and digital release via Bandcamp, under the sobriquet Noemienours, titled As A Beare Doth Her Whelps. It’s a continuation, in some form, of the ursus-themed records she’s been releasing for the past two or three years, and the concept of hibernation, of being at peace with oneself during an extended stasis, fits alongside these lo-fi Minimalist lullabies nicely. It’s a concept that works and works well.

Dal’s songs are glassy, fluttering things. Frequently vamping on a 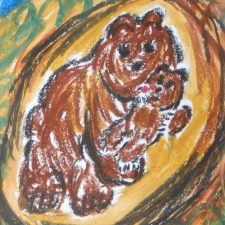 series of high-pitched notes, or a series of high-pitched variations on those notes, Dal transmits and, at her finest, transcends a sense of perseveration. It’s an effective and effecting brand of Minimalism, calling to mind a more stoic (!!!) and less artful Bill Callahan circa The Doctor Came At Dawn. Often, and, most effectively, on the second track, “Non-event,” she coos, bordering on falsetto, over plaintively stroked, detuned chords, a sense of malaise vaguely reminiscent of Dean Roberts’ Be Mine Tonight, another exercise in rewarding patient ears. “Den,” as she rightly notes in her press material, calls to mind Low at its sleepiest.

In her finest moments (and there are a number of them), Dal makes the morphine-drip post-rock of Bedhead seem positively wistful. It must be said, this is serious music, played seriously.

Dal’s new record is a spare and mournful collection, yes yes, but don’t let that threaten you – there are moments of pure, unfiltered beauty on the thing. Take the four-minute-long “Brought Into A Wilderness,” which could’ve run another four minutes, for all of its slumbery, slithery wonderfulness. There are times when Dal’s conceits are tough to digest – the nine-minute-long title track is so spare it’s nearly invisible – but, all in all, Dal has captured an angsty zeitgeist and translated it into a collection of somber skeletons that will haunt you well after the run-time is done.

Plus, let it be said, anyone who can tackle covering David Grubbs – Dal closes with a doe-eyed, slow-core cover of early Gastr del Sol favorite “Ursus Arctis Wonderfilis” – deserves your fanfare.