To call Austin’s Exhalants a bombastic noise-rock trio is to call Everest a molehill. These guys, who released an epic, self-titled full-length via Self Sabotage Aug. 24, write with acid and fire, and burn with the desire to spread their gospel. It’s might stuff. Exhalants don’t craft hooks, but hurl explosions. Their impact on your ears, as a result, is seismic. (This is music is so good that makes you summarize it, as you can see, in grandiose verbiage.) 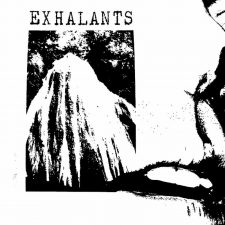 Like Melkbelly – another contemporary noise-rock act with which you can draw parallels – these guys know melody, though.  The songs have their share of earworms as much as they do scorching guitars and pounding drums. (Take the single, “Punishers,” with its charming walls of feedback, and oddball stops and starts.) But, man oh man, when these guys bark, you feel it rush down your spine. The new record, then, all 10 tracks of it, isn’t so much a listening experience as a test of your viability as a vertebrate.

Though much of the record calls to mind Unsane at its finest, songs like “Unshut” hint at a marriage between Helmet and early Bastro. Elsewhere, on “Cauterized,” they elicit shades of Reno’s Elephant Rifle. And when these guys speed up the beats-per-minute, there’s even a passing resemblance to contemporary act Nonagon, another trio that knows how to work a blade on your ears. Exhalants is nothing if not totally at home with and schooled in noise-rock, and its forebears – I’m thinking mostly Carl Sagan’s Skate Shoes – never hinted at the band’s primordial comfort with raising a racket.

That all said, the record is a vitriolic treat and only ingestible when prepared for an onslaught of the senses. Yes, there are “quiet” moments on the closer, “Quiet Place,” which harkens back in sections to Shellac, but it’s all relative – and it’s only a matter of time before guitarist/singer Steve, he of no last name, is roaring at you again. If you’re a fan of music that shakes your insides, though, or believe that noise-rock ended when The Jesus Lizard stopped releasing four-letter LPs, you owe it to yourself to track down these guys. Do it fast. They’re on the hunt.