Talk about a punch to the gut. Something is roiling in Pittsburgh and the punk trio T-Tops is most definitely tapped into it. 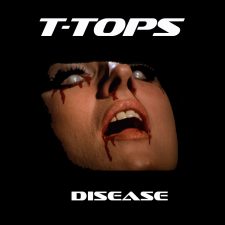 The group’s new EP — Disease, out now on Bandcamp — is a blistering, four-song set, with a rhythm section that pounds itself into your ear-drums and a frontman (guitarist/vocalist Patrick Waters) who angrily blazes the trail ever forward. The songs bark and roar and go for the throat. When Orr’s bass hits, the speakers tremble. This is potent stuff. If you consider yourself a devotee of punk rock in any fashion, you owe it to yourself and your goddamned mother to track down this EP.

The chaos unfurls with the title track, which, if you can imagine it, sounds like a light-footed Melvins covering Nirvana’s Bleach. The comparison is apt (and familiar to those following these guys) because no band in Pittsburgh sounds more like Melvins than T-Tops and that’s a compliment of the highest caliber; when Waters hits a power chord, just as Buzzo does, it resonates like thunder. When Nicholas von Krusenstiern (where is former Don Cab-ist Jouver?) slams the kit, there’s shades of AmRep, crimson and Crover.

The real gem on the disc is the second track, “Incest,” where Waters spits out the words over a pounding thrum – Cop Shoot Cop alum Tod A. would smile if he heard it. The “chorus” is a knot of skittering grunge guitars and tom fills. The thing just teeters on the explosive, with occasional bridges giving way to guitar squalor and a kind of reckless thrashing from von Krusenstiern. On the third track, “Mouth For Hate,” another gem, the group even seals the Bleach comparisons, dropping a drum homage to Nirvana’s “Mr. Moustache.” But the rage contained therein – Waters, again, is in incredible form – steals the spotlight. (The closing track, an untitled and untilted collage of sorts, is interesting but disposable.)

I was a big fan of this group’s 2015 self-titled LP, and T-Tops has continued to do the punk-rock shimmy down memory lane with micro-releases since then; I don’t have to remind many of you of its Cyrus Gold split 10-inch. Yesyesyesyesyes, these guys have a clear formula and it’s a formula that works and will get you wasted. I, for one, am expecting big things from a new record. Onward, gentlemen!