Wishbone Ash has left behind a magnificent legacy in music. For them, they were able to effectively weather several lineup changes starting with the departure of Ted Turner, who was replaced by Home guitarist, Laurie Wisefield. But for a handful of albums, eventually Laurie Wisefield left and the band reunited with Ted Turner. In that time frame, Martin Turner had left, and returned. The vocal album that reunited the band without restrictions was Here To Hear. For many, that album delivered a collection of excellent songs. And we’re happy to have it. 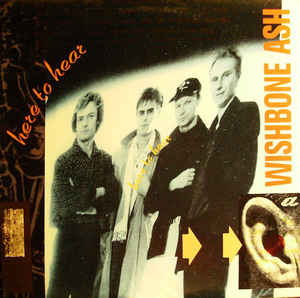 On July  6, Music on CD will reissue the 1989 set, Here To Hear. As it is, I don’t know if it’s being remastered or will use a previous version. And while it would be interesting and welcomed (to have a massive update), especially if it followed on the path of the recent Twin Barrels Burning and Raw To The Bone reissues, if it’s a re-release, then that’s ok given its rarity. But, at the very least, a title that is quite difficult to find (if you’re looking), will be made available to us once again, and not at exorbitant pricing.

If you’re needing a copy of Here To Hear, let’s hope that this reissue, at the very least, provides a bare bones re-release. Bu if it’s more, then, well…

Hope for the best on this one.