We now know that this limited Edition 30CD The Vintage Years 1970-1991 Box set featuring a TON of classic Wishbone Ash material including bonus session tracks will be released on April 20 of 2018. The set is limited to only 2500 copies worldwide and will carry a price tag of $337 (US), and £250 (UK).  This set is currently on pre-order.

We also know a bit more about inclusions. The set will not only contain remastered albums (many from original source tapes, as I’ve long understood Wishbone Four, and There’s The Rub original tapes to be considered gone for good) from the Wishbone Ash debut through Strange Affair albums, but also a wealth of bonus material. You can expect ‘rare album outtakes, B-sides, and 12 previously unreleased studio tracks’, all slipcased within mini-LP cardboard gatefold sleeves.

The Live collection will include the first  Live Dates album, Live Dates Volume Two, and Live in Tokyo. The additional live sets include eight previously unreleased live shows, all between the golden era of 1973 through 1980:

We know that tracks from the Portsmouth Guildhall show were used in the original Live Dates set. Here, we get the entire show over 2CDs. Unfortunately, that’s all from that album. (This means that a Deluxe Edition of Live Dates is STILL a viable grail set with ALL shows remastered and presented, along with a rich booklet of remembrances, and memorabilia included. C’mon Universal, Martin, and Andy! Please?!)

The Box will also include 156-page book of photos, memories, and other goodies. A 36-poster book is added as are four fold-out posters reproductions of original posters for: Christmas at the Palace Dec 1973, Live Dates European tour – Hamburg Musikhalle 1974, Europe 1975 tour, and the Front Page News tour – Empire Pool Wembley 1977.

A facsimile promo pack from MCA is stuffed into this box along with a 7″ flexidisc of “Blind Eye”. To finish the box, signed photos of the band members will be provided. 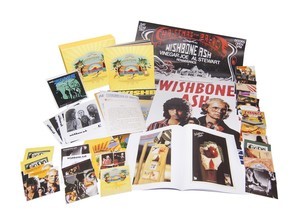 You can pre-order here. Don’t assume they will be there when you’re ready. Just sayin’!

Expect another update when we received the exact tracklist of every CD.