Erasure, growing from their1986 introduction on Mute Records, has released six best-selling classic albums ending with I Say I Say I Say. The entire catalog numbers eighteen studio albums, the last – The Neon – released in 2020. But during their peak 1986-1994 years, they enjoyed the success of 19 hit singles including the mesmerizing “Oh L’mour” and “Who Needs Love Like That”, both from their 1986 set, Wonderland. The Electro-Pop duo of Andy Bell, and Vince Clarke gave the ’80s and early ’90s a healthy dose of classic singles and albums. 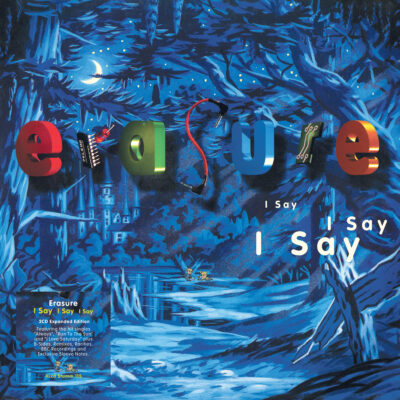 On November 5, Mute Records will revisit I Say I Say I Say with a celebratory expanded 2021 edition of the original album added to with 6 B-sides, and 16 rare and previously unreleased tracks that include demos, remixes, alternate mixes, and BBC recordings from their native UK, where they reigned solidly for almost nine years. The book will include previously unseen photos and new liner notes. The hit singles – “Always”, “Run To The Sun”, and “I Love Saturday” – offloaded from I Say I Say I Say.

I Say I Say I Say will be released as a 2CD hardback Mediabook package, as well as DD.