What’s going on? Why are we featuring the life of Stan Lee on MusicTAP? Well, as with all things, it’s complicated. Hang on, dear reader, and I will clue you in. 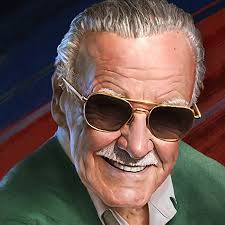 The news arrived on Monday afternoon that Stan Lee, the comics mogul and pioneer, had passed away at the age of 95. His wife, Joan, passed away one year earlier. He had been through the effects of declining health for many years now and, worse, there have been reports surfacing of business dealings that victimized him for at least five years now, and worse, the insinuation that elder abuse beyond financial action had occurred. Although it is sad to see him leave us, we remember the remarkable life of Stanley Lieber and the many co-creations he was involved with.

These, too, are in a gray area of dispute, with many seeing the likes of Jack “The King” Kirby, Steve Ditko, and more as driving influences for the creation of The Fantastic Four, Spider-Man, The Hulk, Iron Man, and on. Still, it must be said that even as a gatekeeper, many iconic characters passed through under his watcher’s eye. However that story is parsed, he was more than a dialogue writer, and the consistency of his prolific output must be regarded highly. 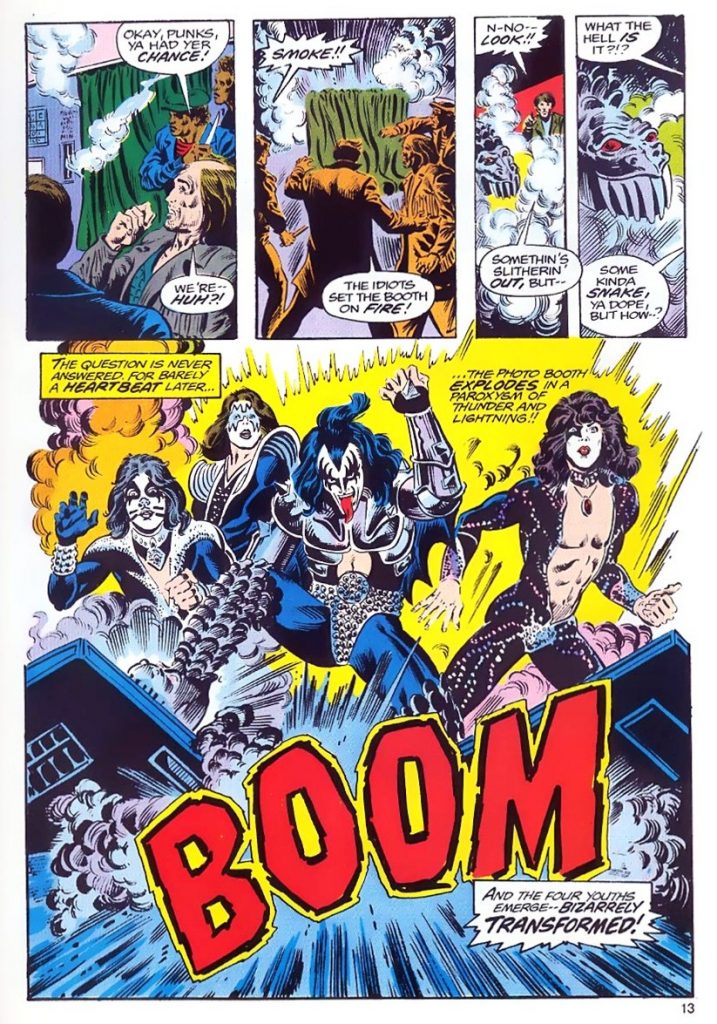 The thing is, Stan Lee loved a gimmick. It goes well beyond a World War II hero who is retrieved from an ice floe and revived in the modern day, or a teenager who has the added complication of having the powers of a spider, or a scientist bombarded with radiation who is enslaved to the monster within that escapes in rage. If something was popping in pop culture, Lee found a way to integrate it into Marvel Comics.

Marvel’s main competition, D.C., was not nearly as interested. After all, their worlds were focused in fantasy: Gotham, Metropolis, and so forth. They were slightly apart from reality and liked it that way. Charlton Comics ran brief series about Bobby Goldsboro, David Cassidy, and The Partridge Family, but these didn’t do much on the open market and they still don’t. Gold Key did a few movie adaptations, but few had the gravitas to connect with the public in a lasting way. In other words, while other publishers wanted their own little parts of the world, Marvel made it clear that they wanted all of the world.

The majority of Marvel’s characters fought in the heart of New York City. They seemed to be grafted, unreal as they are, into our reality. Though it might be absurd in retrospect that such fads and fashions would also be capitalized upon in Marvel’s pages – the space-faring Silver Surfer, blaxploitation hero Luke Cage aka Power Man, Asian kung fu film-influenced superhero Iron Fist (controversially, a white American dude), and pop star mutant Dazzler, among many – Lee saw it as yet another touchpoint that linked Marvel’s universe with our own. 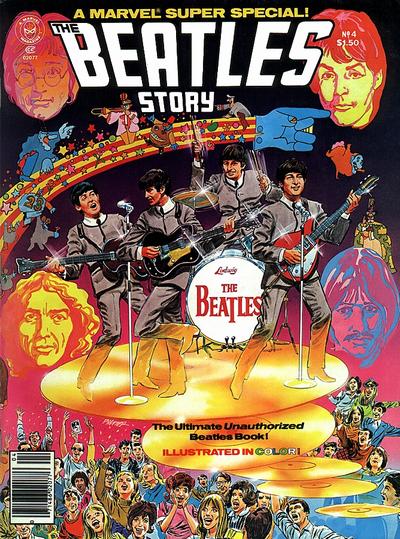 Plus, Lee liked adaptations. Some of these book-to-comic, or movie-to-comic, or TV-to-comic properties were pretty absurd. 2001 A Space Odyssey was never going to translate well, and neither would Logan’s Run. Planet of the Apes was only slightly more successful. By far, the biggest movie-to-comic license Marvel had was for Star Wars. How strange that, decades later, Disney would own both entities.

Movies were not all that got adapted under Lee’s control, and here is the point of this retrospective. In the early-1970s, Marvel was involved with a “rock opera” album based on Spider-Man. (It wasn’t great.) In the 1980’s, they teamed up loosely with Meatloaf for the charity single “A World Without Heroes.” (It wasn’t great.) But Marvel also found ways of bringing music to comics, even if bringing the comics to music wasn’t striking gold. 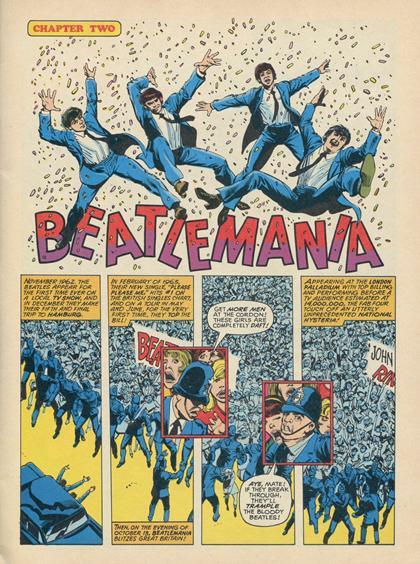 In 1978, when it seemed clear that The Beatles would never get back together, America went through Beatlemania withdrawal. Marvel, never an entity to let an opportunity go untested, released The Beatles Story in their comics magazine series Marvel Super Special. It was a great success, and even today can fetch a resale price of anywhere from $60 in rough shape to $100 in excellent condition. 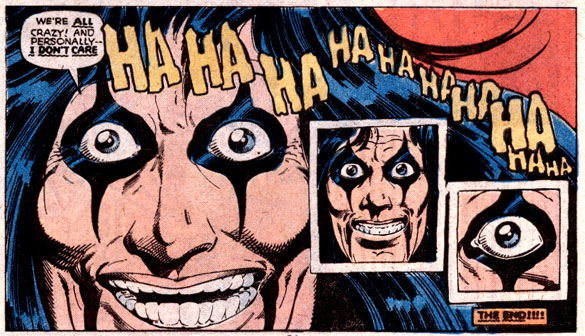 What gave Marvel the guts to tackle the Fab Four? Look back to Marvel Super Special #1 from 1977. In it, the other legendary foursome – Paul, Gene, Ace, and Peter –  transcended down and dirty rock ‘n roll as KISS to become superheroes themselves. Marvel gave a soft intro to Comics KISS in issues 12 and 13 of the infamous Howard The Duck title. In this two-issue arc, Howard has been thrown into a mental asylum and the members of KISS apparently are hallucinatory manifestations of Howard’s madness. This is a concept that would be revisited in Marvel Premiere #50 (1979) when it was Alice Cooper’s turn to get locked up in the sanitarium. Decades later, Alice would return to this netherworld in partnership with author Neil Gaiman with the crossover album and graphic novel The Last Temptation. 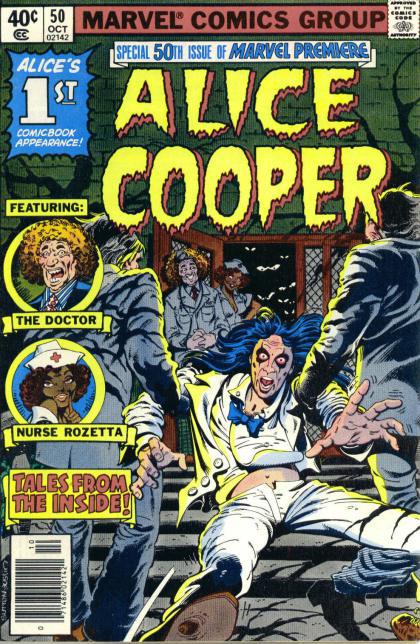 Pop stars and cultural figures would often drift in and out of the Marvel Universe. It did not always work out as planned. In 1980, Marvel Super Special tried its hand at adapting Xanadu, a splashy movie musical about a roller skating disco. It starred musicals legend Gene Kelly, Olivia Newton-John who was hot off the heels of success with the movie adaptation of Grease and featured music from Newton-John and Electric Light Orchestra. (It wasn’t great.) 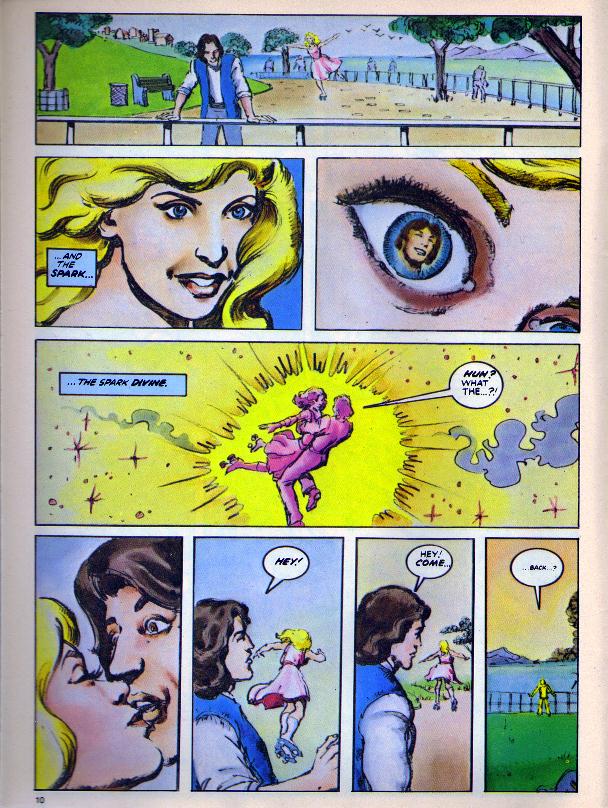 Marvel was not able to separate from the concept of a rollerskating pop star, and in Uncanny X-Men #130, the mutant Dazzler was introduced, and subsequently launched in her own book. A partnership between Marvel and Casablanca Records (home of KISS, by the way), Dazzler was to become a pop star in our real world, too, as Casablanca would fashion a disco act based on the character. The label was also home to Donna Summer and Village People so, in theory, things looked like a slam dunk. However, the disco collapse of the early-80s, financial issues (among other things) involving label head Neil Bogart, and a subsequent selling-off to Polygram, home of Mercury Records, complicated everything. Dazzler quickly became a comics-only item, and struggled to retain an audience, even when comic book art superstar Bill Sienkiewicz fashioned a run of covers for the series. (Sienkiewicz is no stranger to the music world, having painted a portrait of Megadeth’s Dave Mustaine for a guitar string advertisement and the cover of Bruce Cockburn’s The Charity of Night.)

Sometimes Marvel struck paydirt with their musical excursions. Sometimes they ate dirt on them. The underlying theme, however, was their willingness to try and roll up the entirety of pop culture under their banner. Whether it was Captain America, Black Panther, Close Encounters of the Third Kind, Rick Deckard, Indiana Jones, or even John, Paul, George, and Ringo, Marvel was game, and Stan Lee was ready to roll the dice.

It’s fitting that one of the brightest spots in the current Marvel Cinematic Universe of films is Guardians of the Galaxy, a tongue-in-cheek space opera featuring Chris Pratt as the goofy space pirate Star-Lord. His prized possession is a cassette tape of music given to him by his mother before her death. On it, Star-Lord (or Peter Quill…as with all things, it’s complicated) soundtracks his emotions with the selections she chose: Redbone’s “Come and Get Your Love,” The Five Stairsteps’ “Ooh Child,” and The Runaways’ “Cherry Bomb.” Of course, Stan Lee made a cameo appearance in the movie. It was great.