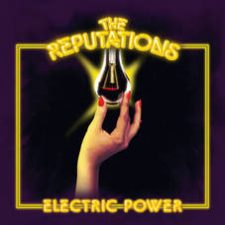 According to the press release:  “Austin-based “power soul” group The Reputations recorded their new album, Electric Power, at the monumental Memphis recording space, Ardent Studios, with musician/producer, Jody Stephens (Big Star). Ardent Studios has housed the creation of classic albums from Big Star (of course), Isaac Hayes, R.E.M., The Raconteurs, Albert Collins, ZZ Top and Jimmie and Stevie Ray Vaughan among countless others. After becoming a fan of The Reputations’ first album, Begging for More, Jody Stephens, drummer of Big Star and manager of Ardent Studios, produced the newalbum, marking his first endeavor under the title of “producer”. In addition to Jody Stephens’ production, The Reputations’ new album was engineered by Adam Hill, a disciple of John Fry’s teaching whose credits include Big Star re-release programs, The Raconteurs, and Low Cut Connie.

The Reputations are made up of vocalist Rockyanne Bullwinkel, Justin Smith on bass and vocals, guitarist Rudy Spencer and drummer Jimmy Wildcat. The group have recently added two more members, Auburn Noel on vocals and Erich Fraustro on guitar. Two previous members, Jenny Carson (vocals) and Seth Gibbs (guitar) are on the recording of Electric Power. The group have played together in various iterations and projects previous to The Reputations; involved in a garage/rock/glam community frequently centralized around the output of Sweetheart Studios, the intimate East Austin recording room, owned and operated by Seth and Jimmy.  They’ve developed a well-crafted union of rock n’ roll, old school R & B, the hard hitting guitar riffs of ’70’s glam rock and even moments of San Francisco sunshine pop. The Reputations’ inspirations are genuinely embraced and passionately reinterpreted.

Ardent Studios is a landmark in the history of American rock, pop, soul and blues. The Reputations’ sphere of influence aligns with many of the sounds captured at Ardent Studios, notably the early ’70’s era of Stax Records, including Booker T. & The M.G.’s and The Staple Singers, who all recorded vital, classic albums there. Of course, Ardent was home to Big Star. Jody Stephens has kept the significance of Big Star alive through avenues such as the documentary, Big Star:  Nothing Can Hurt Me and his performances with “Big Star’s Third”, the sporadic concert-event series with such notables as Chris Stamey, Mike Mills, Ken Stringfellow, Mitch Easter, Brett Harris, Django Haskins and many other fine musicians/singers.  Outside of Big Star-related projects, Mr. Stephens recently released an album through Burger Records with Luther Russell under the name Those Pretty Wrongs.”

With that kind of build-up, it’s an awful lot for a band of young performers to have to shoulder.  And the fact is they don’t/this album doesn’t sound like any of those aforementioned acts.  They do, indeed, have a ’70’s feel, but it’s much more akin to the rock of the late ’60’s/early ’70’s – I don’t honestly hear any elements of Memphis soul in their sound.  So I want to move the focus away from how they’re being touted to how they actually sound.  Certainly, a manic energy comes across clearly on the opening track, “Tightrope”.  Frantic guitar riffs carry the track along with some propulsive drumming and equally manic vocals.  A good start but it’s too much of the same thing on the second song, “The Exciter” –  the problem is the multi-layered vocals make it hard to really get a feel for the song – it comes out as a maelstrom of screaming instead of singing and left me empty.  There is some redemption in the slowed-down nature of the title cut, “Electric Power”, which has some nice harmonies and a good, rock-pop vibe; it makes for a good first single.  “Just Break Your Heart” has an early ’60’s kitschy vibe (in a wry “Johnny Angel” way); “Quite All Right” has a Southern boogie feel with a good groove and “If The Spirit Don’t Move You” is interesting – the lyrics leave a little to be desired (“…if the spirit don’t move you, I pray that rock & roll will…”) but the overall arrangement of the track is enjoyable in – again – a classic rock & roll manner.

Through recent line-up changes during the recording of this album, according to the press release, this band seems to be on a “classic” rock trajectory at the moment, as this album would suggest.  The warm, yet buoyant production is one of the high points, as there are some definite stumbles in the songs themselves.  All bands have growing pains, which is to be expected and learned from, and I’m sure by the next album, The Reputations will have figured it out.

Electric Power will be released on Friday, November 9, 2018.