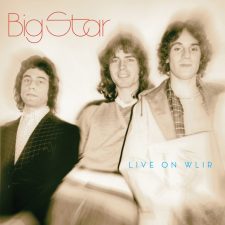 A New Year wouldn’t be complete without SOMETHING from my favorite band (next to The Beatles and The Who), my beloved BIG STAR.

The good folks at Omnivore Recordings are releasing Live On WLIR, a remastered and restored performance originally recorded and broadcast in 1974.

Big Star recorded their second album, Radio City, as a trio, after the departure of founding member Chris Bell. When it came time to tour, original bassist Andy Hummel decided to return to school to pursue his engineering education. Upon his leaving, Alex Chilton and Jody Stephens recruited fellow Memphis native John Lightman to take over on bass duties, and the band readied their live set.

That set is on display as Big Star recorded a radio session at Ultrasonic Studios in New York for broadcast on the city’s pre-eminent WLIR (92.7). Nearly two decades later, those recordings were originally issued by Ryko as Live in 1992. Omnivore Recordings is proud to reintroduce those recordings, restored and remastered from the original tapes, as Live On WLIR, on CD and its first official release on LP.

The 15-track set features material from the band’s two releases, as well as a cover of “Motel Blues” by Loudon Wainwright III (which originally appeared on his classic 1971 sophomore release, Album II).

With new, updated liner notes from Memphis writer/filmmaker, Robert Gordon (who won a Grammy® for his essay in 2010’s Big Star boxed set, Keep An Eye On The Sky) and an interview with John Lightman by Chris Bell biographer Rich Tupica (There Was A Light: The Cosmic History Of Big Star Founder Chris Bell), Live On WLIR enters the Big Star canon in the form it deserves. Because, you know, you get what you deserve.