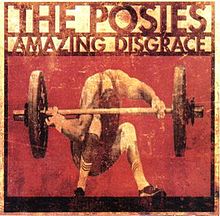 Omnivore Recordings continue with their campaign of Posies reissues and conclude with the last album released by the band on Geffen/DGC, 1996’s Amazing Disgrace.  One listen will tell you that The Posies were not lightweights or simply putting out pretty power pop – no, this was a tougher, heavier and much more world-weary effort than their previous three albums.

After blowing away audiences in Europe while supporting Teenage Fanclub, Pulp, and Superchunk, among others, The Posies cemented a following in Europe that remains loyal to this day. The band changed the rhythm section yet again: enter Brian Young (Fountains of Wayne, Jesus & Mary Chain) on drums and the late Joe “Bass” Skyward (Sky Cries Mary, Sunny Day Real Estate) on bass. With this lineup, they recorded Amazing Disgrace and were packing venues on four continents.

That was the end of The Posies’ tenure with Geffen; the band, overworked and struggling with various issues, released the Success album in 1998 and went dormant for a couple of years. But these three albums on Geffen remain beloved by fans and are the band’s most popular, most often cited, most requested works.

It seems obvious now that having been tapped for success as the “next big thing” (which is such bullshit and so unfair to any artist tagged with that type of classification) and not having reached the expected heights after two major label releases (Dear 23 and Frosting On The Beater), this album is fraught with frustration and, frankly, seething anger.  Case and point, the album’s standout track and one of my overall favorite Posies moments, the caustic but truthful “Everybody Is A Fucking Liar”.  Titles aside, just listen to the meaning and messages – some subtle and some not – to “Daily Mutilation”, “Hate Song” and “Will You Ever Ease Your Mind?”.    Of course, this album also contains one of their most direct pieces, the touchingly powerful “Grant Hart”, which is even more poignant now since Mr. Hart’s passing last year.

The first disc, which contains the original album, includes eight demos.  Omnivore’s expanded packaging includes a second disc of fifteen more songs –  demos for tracks that made it to the original album’s running order, some different versions of released material and other tracks that weren’t released.  By bringing Amazing Disgrace back to the market, The Posies’ reissue program comes to a close for 2018, but it ends on a damned high note.

Amazing Disgrace (re-issue) will be released on Friday, November 30th, 2018