Editor’s Notes: Confronting the Return of “Bohemian Rhapsody” and “Suspiria”

We live in strange times. I don’t have to tell you that. You probably see it all around you, in strained relationships with family, friends, and co-workers. I often joke – well, half-joke – that when the Large Hadron Collider was flipped on at CERN in Switzerland, the universe as we know it slipped into the alternate timeline and we’ve been going slightly bonkers ever since.

When the world you know acts like a drunken cousin at a distant relative’s wedding – “Go home, Antoine, you’re wasted!” – the most common retreat is into entertainment. Music and movies do wonders to help one escape the lunacy. 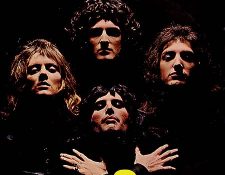 In the year of our lord, 2018, I am confronted with my past folding back upon me. See, when I was a very small kid, two things terrified me: Queen’s “Bohemian Rhapsody” and the TV commercial for Dario Argento’s Suspiria. The former is pretty silly, when you think about it. The now-iconic and used-to-the-point-of-abuse song is actually a terrific example of the band’s versatility and sense of humor. But at the time of its release, I was used to the very linear predictability of pop music. For a five year old in 1975, the drastic changes and total shifts were more than jarring. The closest we came up to that point was The Beach Boys’ “Good Vibrations,” and we knew there was nothing threatening happening there.

The latter is something you should be able to excuse me for. After all, it was 1977, the year of Star Wars and Close Encounters. Nothing insidious was waiting for us in commercial breaks during The Honeymooners and, oh god, that girl brushing her hair has no face!!

This likely marks me as a total wimp. I was freaked out by skulls and sudden time changes in a quasi-operatic rock song. It’s a wonder I ever survived potty training. I have come to appreciate “Bohemian Rhapsody,” the song, although I do not think it is the band’s best. (It’s reintroduction via Wayne’s World took much of the edge off it, too.) Perhaps I’m an old softie, but I prefer their more reflective efforts: “These Are The Days of Our Lives,” “Who Wants To Live Forever,” “The Show Must Go On,” and even “Las Palabras de Amor” from Hot Space. All that said, “Mama mia, mama mia, let me go!” no longer makes me cower.

Here we are in 2018, and what do we find? After at least a decade of American Idol wannabe stars strangling Queen’s signature track for brownie points, the band’s biopic is set to launch this October. Can you guess what it is called?

And in September, director Luca Guadagnino brings his remake of Suspiria to vivid, bloodletting life. Here’s a reminder of where we came from.

Radiohead’s Thom Yorke was tapped to score the flick and his title track, “Suspirium,” premiered yesterday. Some have called it creepy, but I enjoy it quite a bit. It reminds me – in intention, if not in execution – of his band’s “Harry Patch (In Memory Of),” specifically in the way the midsection seems to descend into orchestral dread. “Suspirium” doesn’t lapse into the expected horrific shuddering we expect from a “horror theme,” but it does take unexpected chordal shifts away from where we presuppose the progression will go. With that, we’re always musically on the verge of turning down the wrong corridor.

Now I’m once again coming to terms with two terrors of my youth in the 1970s, resurrected in two wildly different forms, as if I’ve been training for this confrontation my whole life. Only, my realities are far more severe and consequential and both examples do little to bother me. You get used to stuff, right? The psychologists call it “desensitization,” and that sounds about right. After all, nothing in a song or on a screen can be as disorienting as “now.”