Last Flight to Pluto have featured as Prog Magazine’s Limelight pick, played Trinity Live this past May alongside acts such as Steve Rothery Band and Knifeworld, and are now preparing their second album for release. MusicTAP is pleased to present a conversation with vocalist/guitarist/songwriter Alice Freya in which we discuss the band’s “big, dirty approach” to their sound, why prog excites them as performers, and the visuals and stories behind their new album, A Drop in the Ocean. 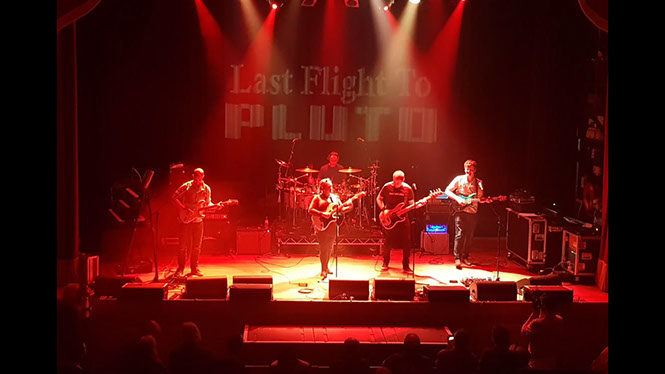 Thanks for chatting, Alice.

No worries, thanks for asking.

I have described Last Flight to Pluto’s music as “brash, raw, and engaging—a deft alchemy of late 70’s Rush and late 90’s Massive Attack in roughly 65-35 ratio.” Anything you want to add to that?

I think they probably are the two influences that come through in our music the most, but the 5 of us in the band have a very varied preference to our likes in styles etc, so we’re probably pretty tough to compare with a lot of bands. I suppose it helps make our music exciting and keep the listener guessing what’s coming next. That’s why we love prog, to us it’s freedom to do whatever we want.

“Prog is freedom.” Sounds like the band’s next t-shirt design.

Yeah, that could be a good idea.

How do y’all’s varied preferences play into the song composition? Does everyone get input?

Well Daz and myself are the main writers, him more of the music side then me with the lyrics, but obviously Daz is a drummer, so if he’s got a riff in his head that he can’t actually play, he usually ends up humming the tune to Jack and getting him to lay it down on the demo. But sometimes I think your influences come through no matter what you’re playing, regardless if you’ve had an input to the writing, your soul comes through in your performance.

Yeah. The Rush influence comes out a lot in Jack’s playing, for instance. Which is a nice thing to hear. Not a lot of bands, even progressive bands, playing with that Hemispheres-big Lifeson approach.

Yeah, we love Rush. We like that big, dirty approach, I think that’s what makes us most comfortable playing, we get to rock out and make a huge noise.

You and Daz Joseph had both been playing live for a while prior to forming Last Flight to Pluto, right? When did y’all start playing together, and why put together a prog band at this time?

We’ve been playing together for about 8 years now. We started out playing covers and made a living out of it for a while. But I suppose the creative musicians in us needed more attention than just learning other people’s songs and playing them. Daz had a history with the prog scene from his days with Ezra so I think it made sense for him to go back to what he loved doing the most. As for the rest of us, like I said it’s freedom for us to express ourselves how we want to. Plus we all know each other’s playing, because of the cover bands we’ve been in together. We’re comfortable with each other’s styles and pretty much know what we’re going to get out of each other.

Speaking of being comfortable playing live together, y’all played the Trinity Live event in May,  which is becoming a major annual progressive music event in the UK. By all accounts, y’all rocked it. How was that experience?

It was absolutely amazing. I’m never nervous, but as I stood backstage, waiting for Jerry Ewing who was going to introduce us and I was a wreck (I think it was because it meant so much to us, being on the same bill as Steve Rothery), Jay our bass player noticed and grabbed me in a headlock, shouting at me “c’mon Freya” and that was it, I was ready to go. The crowd were awesome, really engaging and supportive. As soon as we finished we just wanted to go back out and do it all again. 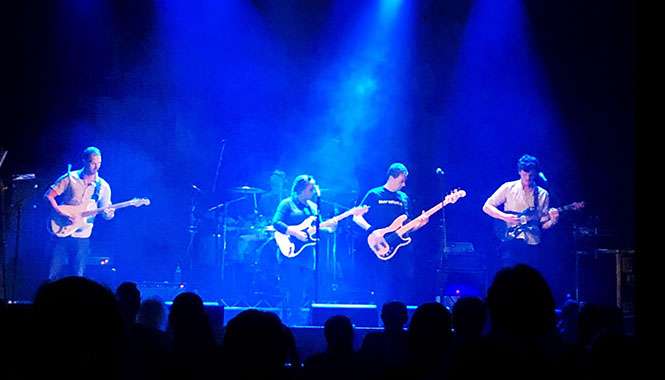 Do you have shows lined up to help launch the new album, A Drop in the Ocean?

That’s the next plan of attack. We’re hoping to get a little mini tour together or an album launch performance somewhere. We’re just really looking forward to playing it.

How was the experience of recording this album compared to See You at the End? What did you do to try to preserve that “big, dirty” approach y’all bring live?

I think we felt a bit more pressure to get everything perfect on the new album compared to our first one, because obviously with See You At The End, there were no expectations at all, no one knew who we were. We’re a band of 5 Gemini’s and disappointment from people is something that would crush us, so I’m really hoping that the fans we now have enjoy this album too. At the Trinity gig there were lots of people there that hadn’t heard of us, so getting such positive feedback was amazing. I think the big dirty sound is just built in us, it just seems that we pick up our instruments and that’s what comes out, balls to the wall .

Hopefully the word continues to get out after Trinity and with this new album. You’re currently mixing A Drop in the Ocean. Do you have a release date set?

Yes, I really hope so. There’s no definite release date yet, I suppose it’ll be when we’re all 100% happy with what we hear. But I’m guessing it’s going to be an autumn release.

Are there plans for a vinyl pressing?

We have been thinking about it, the artwork that we’ve had done for this album is great, just like See You At The End, I think it would be nice to see it all that big. Hopefully one day we could get both albums on vinyl.

It can be expensive up front, but there are more and more options that allow independent bands to press to vinyl. The illustrator for A Drop in the Ocean is a tattoo artist, right? How did that collaboration come about?

Yes she’s currently an apprentice tattooist. We were hoping to get the same artist (Simon) that did SYATE with us to do the work but he’s really busy working on his next book. So I put a Facebook post up on a local page and she was recommended to me. She’s been great to work with, she’s done everything we’ve asked from her. I’m hoping we can work with her again someday.

Excellent. It’s cool to see multi-disciplinary approaches to the total music packages. Like you said, prog is the freedom to do whatever you want—why not have a tattooist develop the album art?

There’s stories behind our songs, so we like it to also be told within the art as well as the music.

The way it should be!

Yes, exactly. We know what we want to hear and see from the songs.

As to the stories behind the songs, can you tell us about one of the tracks on A Drop in the Ocean?

Sure, I think “Masheena” is probably a good one to pick on, as it has a hidden meaning. As you’ll see when the album is released, Masheena is a robot. These days we rely on technology for so many things, my phone broke last week and I really didn’t know what do do with myself, I had to get it fixed that day, I couldn’t wait. So Masheena is singing about her life of servitude, she has been created to do everything for her human master. The other side of it is that it’s all based on domestic violence, about a woman feeling like a slave, trapped in a loveless, abusive relationship.

The opening line….“Bring your work to life, I can move and I can speak.” You could see it from a robot point of view, of her first being powered up and waking, or, bring your work to life, could be that that’s how she is now, he’s wrecked her emotions so much, he created the new her. There are so many people that live with domestic abuse, not just women either. Be it physical or emotional. If the song helps to empower even one person to get out of their situation, it’s making a difference.

That is very prog, though perhaps a bit more personally emotional than your typical science fiction robots concept album. Is there artwork to represent each song then?

Yes, each song has the art accompanying it. Every song has a different meaning, that all leads to one big meaning.

It’s great that y’all are exploring difficult themes and raising awareness of how people are hurting. What’s the best way for people to stay updated on the new album’s release? The Last Flight to Pluto Facebook page?

Yes, I’ll be updating the progress on our page and my own personal account too.

Thanks so much for your time today, Alice. I listen forward to hearing the new album!

No problem Craig, it’s been great talking to you. Thank you. Catch ya soon.