In the age of Trump, we are consumed with allegations of Fake News, the painting of journalists as enemies of the American people, and online jingoism taking the place of studied reportage. Remember when it was all just about CNN or the nightly news grabbing the 15-second soundbyte and running with it? 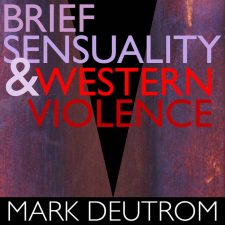 The ex-Melvin started his excellent fifth solo LP — Brief Violence and Western Sensuality, which recently got the reissue treatment via Seasons of Mist – with a brilliantly counter-intuitive, 20-minute-long sound-experiment dubbed “Dick Cheney.” While some of it can be rather plain on its face (the track starts with the slithering of a snake), its ambitions are grandiose, combining a central theme – a drone-metal piece in the vein of “Boris” – with a lot of false starts and noisy chambers. There’s even a faux-patriotic section, with angular guitars flirting with notes of the national anthem. It’s oddly fitting.

But the record is far from some brainy experiment on the life and times of the W. administration. “Temple Smasher,” a grungy road-runner, is an absolute joy, with a lot of crunchy palm-muting, and angular stops and starts. The delightfully dirty “Miniskirt” is, circa 2013, Deutrom’s latest answer to Stoner Witch, combining a kind of ZZ-classic rock strut with Deutrom’s signature sense of rhythm. (The solo alone, a kind of whipper-all, is worth checking out.) Elsewhere, the disc flirts with jazz stylings (the moody and wonderfully out-of-place “A Shaky Rabbit”) and psychedelics (closer “Turn Toward The Sun”), both to interesting effect.

Now, I came to Deutrom late. I had been following Melvins for a number of years when he joined the band in the early/early-mid 90s, was impressed with what he offered the trio’s sound – Stoner Witch remains a landmark — but I didn’t follow him much after he parted ways with Buzzo and Crover in ’97. The Season of Mist reissues are designed precisely for people like us, who are willing to give Deutrom a certain amount of respect and critical re-inspection. With a disc like Brief Violence, following on the heals of the reissued Silent Treatment, it’s hard not to be impressed.