With little arriving product information coming out in this usually slow month of December (and this month has been better than years past), I discovered something that even I got excited about even though it was released a few days previous.

On December 15, an independent label by the name of Quake Records, released a reissue of Squeezing Out Sparks, the magnificent and brilliant 1979 Graham Parker classic that is on the Rolling Stone Best 500 Rock Albums of All time list. The tracks here have been remastered for better sound although, by their own admission, it just does slightly better than the Arista reissue from 1996 that includes a collection of live versions of the album’s tracks. However, it’s said that the audio improvement is significant over the UK reissue from Vertigo/Mercury (2001).

This Quake Records reissue is not only remastered but will feature previously unheard live tracks from the band’s June 24, 1979 support show at the Paramount Theatre in Seattle, WA (see list below). The cover has been re-imagined as well.

Squeezing Out Sparks can be ordered here. 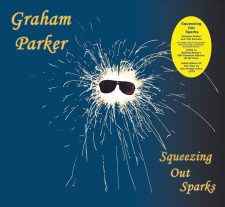