Here’s a piece of news that lovers of Laurie Anderson, and Kronos Quartet will love: They collaborate and we’re going to get that album in 2018.

As many of you know, Laurie Anderson first caught our attention with her entertaining “O Superman” tune way way back in 1982 on Big Science, made even better on long play 12″. As she progressed, her albums became more magnificent, although, admittedly for avant garde taste. But if you adventured into that realm, there was little she couldn’t do. (Case in point: The Ugly One With The Jewels, a sparkling spoken word album as eerie as it could be!)

And then, there the Kronos Quartet. A string quartet from San Francisco, they have given the world plenty of beautiful compositions and film scores including Philip Glass’ Dracula score to the 1931 Browning classic. With a wide range of strong works (like the extraordinary Howl, USA from 1996), the Kronos Quartet has rarely disappointed, if ever.

On February 16, Nonesuch will release Landfall, an extended set featuring both talents! The new album is planned for CD, DD, and vinyl 2LP. You can hear the first promo single below: “We Have Yet To Speak Another Language”, which is downloadable right now, or easily streamed (hear below): 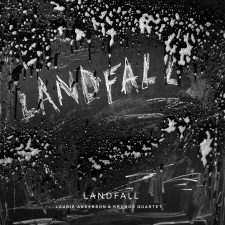