Slade has enjoyed quite a resurgence of attention over the past few years. Their classic era sets have mostly been remastered, expanded, and re-released on color vinyl sets. For those with ageing sets, they were given a rare ability to upgrade their libraries. And so there are more sets being released to capitalize on the interest.

On January 27, Cantare Records will release a Slade set to be called Rockin’ The Box. It will contain two live television performances from 1971. The two shows feature Manchester, and Belgium with six tracks apiece. If you’re a completist, then Rockin’ The Box just might be a nice slip in the shelves. 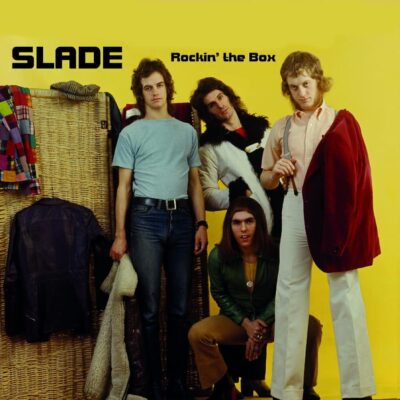 The set is planned only for CD release.

Slade formed in Wolverhampton in 1966 and rose to prominence during the glam rock era in the early 1970s, achieving 17 consecutive top 20 hits and six number ones on the UK Singles Chart. They were one of the most successful British groups of the 1970s based on sales of singles and were the first act to have three singles enter the charts at number one. They also had a fearsome live reputation. Two performances made for television in 1971 feature on this discs and bear witness to the visceral, raw power that was Slade in concert. Hear Me Calling*/Look What You Dun*/Darling Be Home Soon*/Coz I Luv You*/Get Down And Get With It * Born To Be Wild*/Hear Me Calling#/I’m Coming Home#/Darling Be Home Soon#/Coz I Luv You#/Get Down And Get With It #/Born To Be Wild# *Live in Manchester #Live in Belgium