Emerson, Lake & Palmer – or ELP as the fans and press have used – has a strong history of music beginning with their eponymous debut in 1970. The band itself formed from three bands known as The Nice (Emerson), Atomic Rooster (Palmer), and early edition King Crimson (Lake). With interests in classical, progressive, and experimental styles, the trio went on to top-level fame lasting for approximately seven years. At peak, they released six albums, two of them well-received live sets (Pictures At An Exhibition [1971], Welcome Back My Friends… [1974]). They also released two volumes of collected Works from each member and collectively.

ELP has a string of single issues that served the band well in several countries, all with varying tastes for the location. They have several cuts that are representative of the band, including “From The Beginning”, “Lucky Man”, “Jerusalem”, and in the UK, “Fanfare For The Common Man”.

Manticore and BMG partnered to replicate those singles in a boxed set that flows with the current trend of releasing vinyl 7″ box sets for bands. If you’re a fan of ELP, this Singles box will deliver you not only a collectible but also the great cuts from them. Singles has 12 7″ vinyl sets in the box. 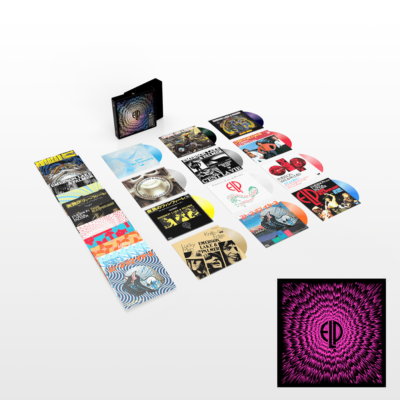 The box cover itself is a brilliant lenticular of the ELP sigil in a colorful exploding style. The back lists each contained 7″ and their country of origin. a 16-page booklet is packed inside detailing the singles along with photos, credits, and an essay. Along with the singles and booklet are a set of 12 7″ art cards representing each single.

The vinyl singles are in the original art for the original release. The singles inside are pressed in various colors, and use the UK spindle punch for turntable play. The music found on the singles were newly remastered by Andy Pearce and sound as good as they always have.

Personally, I’m pleased with the box of 7″ vinyl singles. Not only is it a collectible add to my widespread ELP collection, they’re fun to play affording that hint of nostalgia. That nostalgia even spreads to the days when acquisition of pressings from other countries was a pursuit. This Singles box satisfies that itch. Finally scratched, I like the box for what it is – great music from a great band, presented in a wonderful format and collection.

Should you become interested, here is the link for ordering Singles by ELP.

One thought on “Review: Singles – ELP”