Tears For Fears, one of the premier bands of the ’80s, delivered a winning set with their worldwide multi-platinum 2nd album, Songs From The Big Chair. Previously, they had released The Hurting (1983) that gained the ears of the UK audience. With their important second album, they provided five strong hits giving the album a long lifespan on the charts. Tears For Fears released a third album, Seeds Of Love, before Curt Smith left the band. (Currently, Curt is back in the lineup.) All in, Tears For Fears released six studio albums, their last being Everybody Loves A Happy Ending in 2004 and with Curt Smith. (Roland Orzabel is the lone mainstay of the band.) Now, it’s time for another…

On February 25 of 2022, Tears For Fears will release their 7th title, The Tipping Point. The new album will feature ten new songs, with an additional 3 tunes reserved for a Deluxe CD Edition. A single from the new album is the title track and can be enjoyed below. 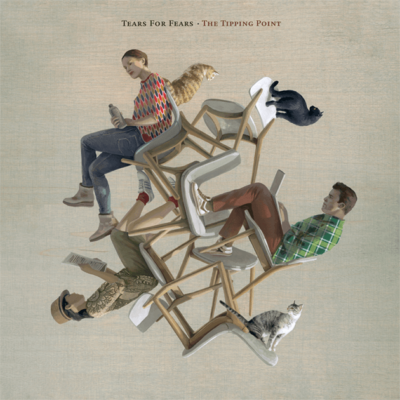 The Tipping Point will be made available on CD, Deluxe Edition CD, DD, and two versions of vinyl LP – standard industry  black, and a limited edition green color vinyl. The CD edition has a 24-page booklet with the Deluxe CD edition containing a 32-page booklet.

The Tipping Point – Tears For Fears