Unless The Beatles are reforming for a brand new album and an extended tour, there’s little that can compete with the wild but exciting reveal that the Pink Floyd classic Animals album has been officially completed but sitting on a shelf for these past three years. Roger Waters announced that he has decided to avoid the inclusion of contentious liner notes in order to get the 2018 Guthrie remixes of Animals out to the anticipating Pink Floyd fans. (You can read those notes here.) While the YouTube post can be viewed as a need to be right in the eye of the public, it’s also a dig at David Gilmour, who might get angry enough to withhold the reissue altogether just to get folks “angrier” at Roger Waters. Regardless, let’s hope that this time the 2018 Animals remixes become actually available. Hell, while the album is my FAVORITE Pink Floyd issue, it’s hardly the absolute favorite of all fans. (Prove me wrong!) You can view the Roger Waters video post below.

The new video shows a album with a new cover shot and a revealing sticker displaying the contents of the “new”  Animals package. What appears to be included in the Immersion package will be both 2018 mixes of Stereo and 5.1 Surround of the original album. Additionally, the limited edition 4-disc package will include a vinyl LP, a DVD, and a BD. The DVD and BD will contain the hi-resolution Stereo and 5.1 remixes plus the original 1977 Stereo mix of Animals. 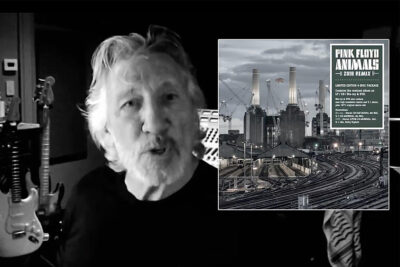 The Blu-ray BD will contain Stereo resolutions of 192kHz/24-bit and 5.1 resolution of 96kHz/24-bit. The DVD will provide the remixes in 96kHz/24-bit LPCM Stereo, and a Dolby Digital mix of the 5.1 Surround. I’m not complaining but now with all these updated formats (Atmos, etc), why not take the time to upgrade the package with an updated sound capability. Hey, we’ve already waited this long, what’s another year?

Regardless, let’s get excited for the possible upcoming Animals remixes!