Chicago has had its fair share of representative music creators. All have played a large part in the formation of Rock during its more than 60 years of growth. One such musician is Steve Goodman. In fact, from his debut album came the song, “City of New Orleans”, a tune often and mistakenly attributed to the mind of Arlo Guthrie, who elevated it to hit status. But Goodman’s original is as captivating and should be listened to. Over decades, Steve Goodman recorded and released over ten studio works. In 1984, Steve Goodman passed from this world from leukemia. He remains a legendary artist from the early years of Rock. 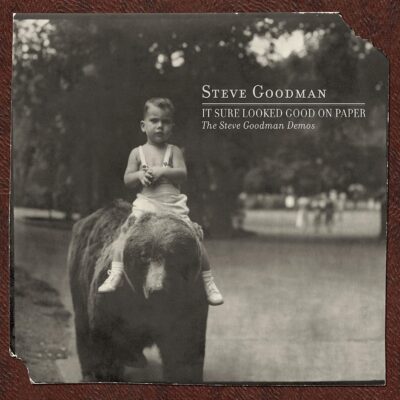 On May 14, Omnivore Recordings will release a collection of 20 Steve Goodman demos in a compilation called It Sure Looked Good on Paper: The Steve Goodman Demos. This new album will share both solo and band demos, including a band demo for “City of New Orleans”.

Omnivore Recordings have graciously extended to us an exclusive “first listen” to the demo track of “City Of New Orleans (hear below).

It Sure Looked Good On Paper: The Demos of Steve Goodman will be released on CD, DD, and vinyl 2LP.

It Sure Looked Good On Paper: The Demos of Steve Goodman – Steve Goodman
01 City Of New Orleans
02 The Sun & The Bridge
03 Climb The Hills To Dale
04 Jazzman
05 Hands On Time
06 Eight Ball Blues
07 Would You Like To Learn To Dance
08 Turnpike Tom
09 Ballad Of Paul Powell
10 Yellow Coat
11 You Never Even Call Me By My Name
12 The Dutchman
13 Song For David
14 Kiss Me Goodbye Again
15 The Auctioneer
16 Six Pack
17 Dead Men Don’t Wear Paid
18 Face On The Cutting Room Floor
19 It Sure Looked Good On Paper
20 The Water Is Wide

NEW VIDEO: RICHARD BARONE & JOHNATHAN PUSHKAR, “I Get Around”