Anthrax was one of the first metal bands to deliver a hardcore Thrash Metal to a growing base of fans. Originating in NYC, Anthrax brought an East Coast flavor to the style otherwise dominated by the West Coast music of Slayer, and Metallica. Together, these bands (and a few others) brought Thrash Metal to the forefront in the early ’80s allowing for more variety than New Wave, Post-Punk, and the evolving Heavy Metal of many other bands. 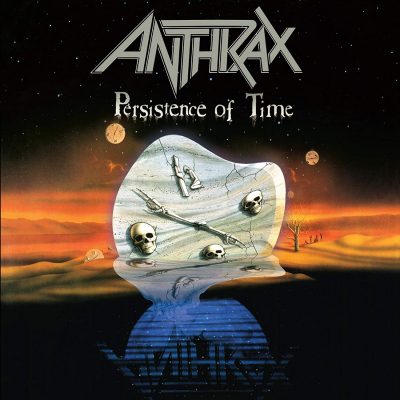 On August 21, Megaforce Records will celebrate the 30th Anniversary of Persistence of Time with a 2CD/1DVD Deluxe Edition and a 4LP Deluxe Edition. The artwork of the cover will reflect the art originally intended for the album in its 1990 release. CD1 will contain the original album, newly remastered. CD1 will also contain two bonus tracks (“I’m The Man”, a B-side track, and a live performance track of “Time” from a 1991 show at the Palace of Auburn Hills in Detroit (a venue that no longer stands)).

CD2 features songs from “Charlie’s Stash” of rehearsal recordings, live sets, and demos. The DVD (not included with the 4LP set) will contain the 40-minute tour video from the band’s 1991 tour period, including backstage footage. Other cool video events include Charlie Benante replacing Iron Maiden’s Nick McBrain on drums. The booklet contains photos, new liner notes, memorabilia, and credits pertinent to Persistence of Time. This album is the band’s fifth album out of eleven titles.