Singles Bar: “Living In A Ghost Town” – The Rolling Stones

So, we’ve had a few days with the opening salvo from an upcoming Rolling Stones album in “Living In A Ghost Town”. After those few days, the discussion should commence as to whether or not The Stones have delivered a great tune…or not.

For me, I depend on the first arriving single to be strong and representative of the playing style of any artist. In short, it should excite me and get me to salivate for the next song. I’m going to be honest, “Living In A Ghost Town” doesn’t do that. Of course, that doesn’t make it a bad song. I’m not sure the Stones could do up a “bad” song, per se.  But they can certainly assemble a forgettable album.

“Living In a Ghost Town” feels lazy to me. And I’m not overly excited to hear the new album, when and if its decided to be released. The song feels musically broken, a filler track (for me). I’m hoping that the next drop puts me in a better mood.

Note: I’m brutal even to bands I love, When the ball is dropped over several albums, I tune out. And I REALLY want the Stones to close their career out with a gem. Give me a riff, Keith!

For those interested, The Stones will release a 10″ 33 1/3RPM orange-colored vinyl single on June 26 via Interscope Records. 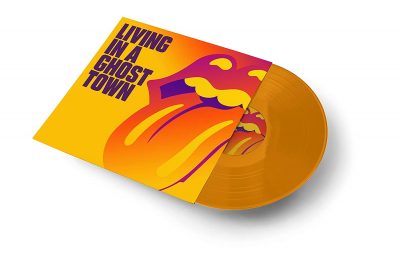 Sex Pistols Vinyl Single Classic, “God Save The Queen”, To Be Reissued

One thought on “Singles Bar: “Living In A Ghost Town” – The Rolling Stones”