10-Track The Best Of Uriah Heep In July

Uriah Heep is still a touring and recording unit today because of the perseverance and qualitative work of original band member, Mick Box. Since 1969, the band has worked through several member changes. But there was a definite classic period with Mick Box, Ken Hensley, David Byron, Lee Kerslake, and Gary Thain. This classic period does not diminish in any way what came before and what came after. Uriah Heep is still a solid – and timeless – band. With that said, it’s good to revisit the past. Not long ago, there were remastered updates along with alternate versions of early albums. Those stalled at the release of The Magician’s Birthday. (It would be nice to see later albums remastered and reissued; albums like Sweet Freedom, Wonderworld, and Return To Fantasy. But those may never arrive.) 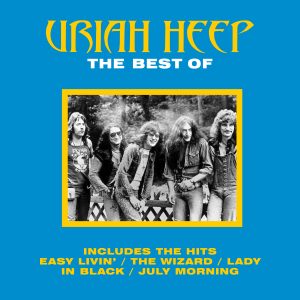 On July 12, Sanctuary Records will collect ten classic Uriah Heep hits and put them into a reasonably priced ‘best of’ set called simply, The Best of Uriah Heep. This set will feature ten remastered tracks from the recently reissued classic Mercury albums, including a live performance track from Uriah Heep Live (1973). Interestingly, this collection reaches into Innocent Victim for the inclusion of “Free ‘n Easy”, but doesn’t include the actual hit from that set, “Free Me”. Nor does it include “Stealin'”.

The Best Of Uriah Heep will be issued on CD and DD. For the ultimate collection, default to Your Turn To Remember: The Definitive Anthology 1970-1990 issued in 2018.