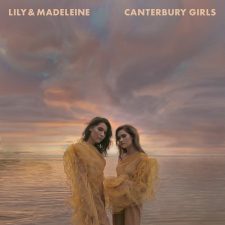 For years, the sister duo of Lily & Madeleine have created a series of songs that spoke far, far beyond their years. Their introduction was the five-track EP masterpiece known as The Weight Of The Globe. It was released in 2013, and immediately captured the attention of folk/rock music fans. At the time, Lily was sixteen, and Madeleine was eighteen. With a talent in place for composition as well as captivating harmonies, the sisters set about gathering fans little by little.

Their first full-length album was released in 2013, and followed by their last two, Fumes (2014), and their New West debut, Keep It Together (2015). But since Keep It Together, the sisters Jurkiewicz have been unusually silent, music-wise.

On February 22, almost a full three years from the date of their last, New West will release the fourth Lily & Madeleine album. The new album will be called Canterbury Girls, and will contain ten brand new songs. Of those, one is already available as a lead-in single and can be purchased (hear “Self Care” below).

Canterbury Girls will be released on CD, DD, and vinyl LP.