On the final night of his three night sold out residency at the Royal Albert Hall, London in March 2018, Steven Wilson performed what was, in essence, a retrospective of his career. He’s been incredibly busy for well over two decades. Setting aside his work with the band Porcupine Tree, he’s also been a collaborative partner in the groups No-Man, Storm Corrosion, Blackfield, recorded as the experimental entity Bass Communion, resided behind the boards for copious productions and remixes, and still had time to embark on a successful solo career. 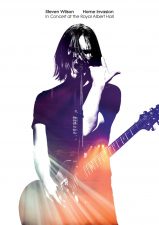 His latest release is a document of that third night. Home Invasion: In Concert At The Royal Albert Hall, arrives in multiple formats and focuses primarily on his most recent studio album, To The Bone, with all the songs from the record represented in the playlist. To The Bone purportedly was Wilson’s bid for top-40 pop stardom, but that’s not necessarily true. Even at his most doomy and metallic, or most proggy and orchestral, Wilson has always had at least one foot in the mainstream. One need only to look to 1999’s Stupid Dream or 2000’s Lightbulb Sun to recognize Wilson’s skill at a solid hook and a great chorus. The point here being: there aren’t as many jarring tonal shifts on Home Invasion as might be assumed, and that’s a good thing. Incidentally, the title of the album pulls double duty, as a callback to the track from 2015’s Hand-Cannot-Erase and as recognition of his performing on the home turf of London.

Given Wilson’s prodigious skill with recording and his fixation with packaging, there’s no question of Home Invasion being anything but utterly professional. There is an inherent problem with this, however. This is very much a kind of “greatest hits” performed live. Wilson’s loyal fanbase tends to be dutiful consumers, meaning that they probably own all the studio efforts mentioned before as well as followup E.P.s, other live documents, odds-and-ends collections, and so on.

This makes Home Invasion, as inclusive as it is, also limited. I cannot speak of the U.K. top-40 charts, but it is a fair assessment that those who know Wilson here in the U.S. do so because they have followed him for years, not because they suddenly found him and are in need of a proper primer. Aside from the live renditions of To The Bone, the fans are all too aware of this presentation’s contents. For those who have to have it all, they’ll have to have this as well. For others who were previously inculcated, this could be past the point of burn out for them. There hasn’t been a year that at least one Wilson project hasn’t been on the doorstep, and in some years it’s been two or three. Who could blame those who need a vacation from it?

It’s really neat to see the new material residing alongside “Lazarus,” “Even Less,” and “The Sound of Muzak.” The 5-LP mega box set also includes “How Is Your Life Today?” and “Blackfield,” further bolstering the collection’s retrospective status. Everything looks good and sounds great, so there could be no argument against the effort from the standpoint of quality. If you are a Steven Wilson fan, there are multiple iterations of Home Invasion to fit your consumptions and price allowances.

Bottom line: if you enjoy Steven Wilson and all the material he puts out, you’re going to love Home Invasion: In Concert At The Royal Albert Hall. It’s a typically well-crafted production. If you’re feeling overwhelmed by the influx of content, you would not be faulted for looking at your music shelf, tallying up all the Wilson-related items and their live recording counterparts, and sitting this one out.