2005 was a bad time for prog rock. Fans of the genre will dispute this and say it was a golden age, and if you look back strictly in terms of quantity, you’d be right. There was a lot of stuff, and most of it was enjoyable. Nonetheless, there were way too many bands that wanted to sound like other bands. This one clearly was influenced by Kansas, that one by Rush, and the next one by Yes. Over there? King Crimson clone, no question. 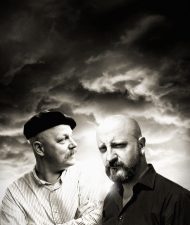 It was enough to make someone very jaded. What broke through the deadlock – for me, anyway – was when I received a packet of review CDs (ah, the days of physical media for review). In it was a handful of discs, some exhibiting the same carbon copy problems just mentioned. But there was also the Swedish band Carptree’s Man Made Machine. It did not have a press release included, unlike the other discs, and there was something annoyingly obligatory about its placement in that envelope. Thinking back, that’s the only part of the contents I recall. While the sound-enough-alikes have come and gone, Carptree arrived as its own creation, unique and fully-formed, and have stayed that way more than a decade on.

That’s a good thing. What vocalist Niclas Flinck and keyboardist Carl Westholm accomplished remains a singular feat. The sound of Carptree is retro and futurist at the same time, with Westholm flipping from analog organs and keyboard patches to the most unearthly sonics in recordings today. The overall vibe frequently dips into doom metal, but Flinck’s voice cuts through it with almost a 70s soft-rock vibe. Hopefully, the description of the juxtaposition doesn’t chase you off. If you have ever expressed boredom from the lack of surprise in modern music, Carptree is the antidote for it.

With October’s release of the duo’s Subimago, their seventh full-length collaboration, Flinck and Westholm remove all doubt that they’ve lost anything. Their trusty backup band, The NFO (No Future Orchestra), is enlisted once more to hammer home the return, but there are some distinct changes. For instance, in 2008, Carptree went on a brief hiatus while Westholm focused on the Jupiter Society, a side project that was straight-up sci-fi metal. Those releases are recommended as well, but they are sincerely heavy and decidedly dark in content. The guiding principle behind Jupiter Society’s lyrical fictions was that the universe is a hostile place where pretty nasty things happen to humans. Be prepared. That dystopian bent, which had been occasionally touched upon in Carptree, tended to dominate 2010’s Nymf and 2017’s Emerger.

With Subimago (which is defined as “a stage in the development of some insects – such as the mayflies – between the nymph and imago in which the insect is able to fly but becomes mature only after a further molt”), one literally can hear the duo’s desire to inch toward something else. It’s still dark in their part of the world, but the intention is trying to reach toward the light. “World Without Mind” holds the line near a more traditional hard rock sound. “Instead of Life” has a gothic, chamber tone to it. It feels a bit mournful, as befits the title, but is crucial to offset some of the harder-edged tracks.

The opener, “Welcome,” is thunderous and foreboding, with Flinck’s  gentle voice taking a bit of the sting off the sound that, while thrilling, is hardly welcoming. “Eye of the Storm” jolts back and forth from acoustics to electric stomping.

What does it all mean? If I am to hazard a guess, Carptree is tying together a conceptual thread. It’s obvious when you put the album titles together, from nymph, to the creature – or, the “emerger” – escaping the coccoon, to the perilous pre-adult stage. You might even say this thread began with the record before Nymf, 2007’s Insekt, but I have a different take on this. Insekt was the last time the band really embraced moments of pop without the need to qualify it with a shadow side. Here in 2018, listening to Subimago, I could not imagine the points of levity that constituted 2001’s “Ten Days of Rain,” or 2003’s romantic “Superhero” or “Lie Down.” Westholm and Flinck have recognized a darker, dangerous world, and their music has reflected these societal changes in the analogy of insect lifecycles. The question is: does Subimago represent a journey back toward a bit of lightness or a sense of futility and mortality? Hard to say. We’ll have to wait and see if the follow up album answers that question.

But does that help recommend Subimago to uninitiated prog listeners? The answer is yes. The album, and the band that created it, are utterly unique, and if you still hunger for songs that aren’t totally predictable, Carptree is here to help. If, on the other hand, you want something that feels good and light, you’re not ready for the record. Westholm and Flinck are absolutely working toward a resolution with their efforts, and you need to accept what they’re providing on their terms, otherwise you might feel a bit crushed underneath the weight of their ambitions.

They say there’s nothing new under the sun, and that may be true, but Carptree is actively attempting to be their own creature. They’re certainly succeeding as they try to reach for light in these dark times. I hope the next unofficial chapter in this story gets them there.

Subimago is available at this link.