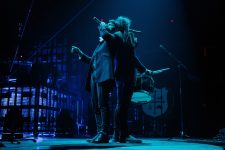 Brother act for KING & COUNTRY, comprised of Joel and Luke Smallbone, celebrated release of the album Burn The Ships with a (mostly) upbeat show in downtown Los Angeles. The new album presents the group as a EDM-influenced worship act, but in concert – with an army of percussionists – the ensemble came off closer to the Christian music equivalent to Imagine Dragons.

The world needs only one (if that) Imagine Dragons, and certainly doesn’t require there to be a Christian-oriented one. One might get the impression all this pounding meant the brothers aren’t confident enough in these new songs unless they’re assertively pounded into the audience. If they think like this way, they’re wrong. Songs like the older “The Proof of Your Love” and the newer “God Only Knows” reveal sensitive songwriting skills that don’t need added big beats to succeed.

The group got to one of its biggest hits, “Fix My Eyes,” early on, and then performed a healthy selection of tracks from its latest album. The act’s between song stories were also appropriately moving, especially the introduction to “Priceless” with its pro-women sentiments.

With all the sticks and drumheads onstage, it then made perfect sense when the pair played “Little Drummer Boy” for its seasonal selection. Not to beat a dead horse, so to speak, the show was opened by Darren King (formerly of MUTEMATH), who drummed along to songs sung by his wife, Stacy King. Along with a violinist, this collective created a lovely, mystical mood.

Burn The Ships is one of the more sonically adventurous worship-related albums to come along in a long time, but KING & COUNTRY’s live presentation of these songs left a little something to be desired. There is much goodness and potential in this act, though, so it would be unfair to write them off based upon one underwhelming show. Once they let the melodies and lyrics speak for themselves, without overwhelming and unnecessary percussive exclamation points, for KING & COUNTRY will be ready to turn concerts into truly transformative experiences.