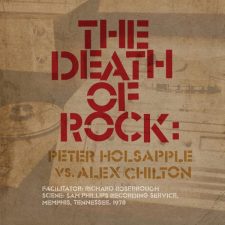 First, the official story:  in 1978 at Sam Phillips Recording Service in Memphis, Tennessee, Peter Holsapple came to town looking for the essence of Big Star. He hooked up with musician/engineer/friend-of-Big Star, Richard Rosebrough after approaching, and being turned down by, Chris Bell who Holsapple had hoped might be interested in producing him. Together, Richard and Peter started laying down tracks during the off hours at the studio.

Big Star’s former guitarist/singer/songwriter Alex Chilton, meanwhile, was working on his solo album, Like Flies On Sherbert, also being tracked at Phillips. Chilton told Peter, “I heard some of that stuff you’re working on with Richard… and it really sucks.” Alex promised to come by and show Peter “how it’s done.”

These are the results.  Chilton’s tracks definitely line up with the chaos soon heard on Flies…, while several of Peter’s songs later made their way on the first two classic dB’s albums (“Bad Reputation” and “We Were Happy There”) and on an album by The Troggs (“The Death Of Rock” retooled as “I’m In Control”).  This album is a crossroads, with both artists moving past one another in distinctly different directions. Chilton veered toward punk/psychobilly – as he began playing with Tav Falco’s Panther Burns and produced The Cramps debut, Songs The Lord Taught Us, within a few months of these recordings; Holsapple went to New York to join The dB’s and enter the world of “sweet pop.”

Now, the music:  you can look at the design of this CD as an album; i.e. “side one” and “side two”, with Peter’s tracks being Side A.  Opening with a slower, but no less intense, version of “Bad Reputation”, it’s an interesting genesis of a song I’ve known since I first heard it in 1981.  The lyrics are the same; the chord structure is the same – only the tempo is markedly different and the piano punctures are more pronounced and slightly askew – even the solo is the same – although the track cuts off as the guitar break is due to circle back into the last run through of the chorus.  Again – these are early run-throughs of songs.  “House Is Not A Home” is a trademark Holsapple piece, full of melody and sweet melancholia; “We Were Happy There”, one of the centerpieces of The dB’s Repercussion, is (obviously) stripped down but still has the celestial feel of the later-released version.  The album’s title track is a neat and upbeat piece of tongue-in-cheek power pop at its 1978 best, while “Take Me Back” reminds me in ways of the later “Nothing Is Wrong”, with its slower tempo and wistful feel.

Alex Chilton’s “Tennis Bum” is a “Wooly Bully” kind of garage groover and bit of fun; “Marshall Law” is a slab of intensity rolled into a garage-surf-punk mode and is disjointedly appealing, while the old rock & roll chestnut is silly fun.  Chilton’s take on “The Train Kept A Rollin'” is as far from The Yardbirds’ rave-up as you can get – it’s far more a rockabilly moment and “Hey Mona” is a Bo Diddley classic with the necessary “Hand Jive” rhythm and a damned fine reverb drenched guitar track.

Of note, from some of the bonus tracks, there’s a “rehearsal take” of Big Star’s “O My Soul”, the killer opening cut from Radio City and a rehearsal run-through of Big Star’s classic “In The Street”, which sounds pretty fucking accurate.

One of the more fascinating finds I’ve heard as of late, this is definitely a perfect bridge between post-Big Star Alex Chilton and pre-dB’s Peter Holsapple.  It’s a lot of fun, interesting and if there’s one thing I could say, it’s I would have liked to be a fly on the wall for some of the sessions and conversations.  With liner notes from acclaimed Memphis author/music historian Robert Gordon and Mr. Holsapple himself, you really can’t go wrong.

Peter Holsapple vs. Alex Chilton – The Death Of Rock is available now

Peter Holsapple vs. Alex Chilton — The Death Of Rock