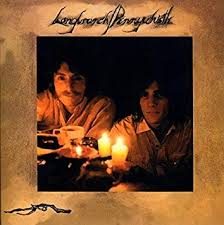 For those who may not know, Longbranch/Pennywhistle was a country rock/folk duo comprising Glenn Frey and John David Souther, which they formed not long after meeting in Los Angeles. They released a self-titled album in 1969 under the Amos Records label (distributed by Bell Records) – who, interestingly had also signed a Texas band called Shiloh; their drummer was Don Henley . Both Frey and Souther had made the migration from Detroit to California and were adapting to what would become the California sound, first dipping deep into the then-burgeoning new country-rock style. The album sank without a trace and became a footnote in both Frey’s and Souther’s illustrious careers, as they pulled the plug on Longbranch/Pennywhistle in 1970, a year after the album’s release .  It was resurrected as part of the Glenn Frey boxset, released earlier this year, Above The Clouds: The Collection, but now, Geffen has seen fit to issue the album for the first time on CD and reissue it on vinyl (nice touch on the physical label, as the print is the same as the original Amos pressing).  Some of the fine musicians who helped shape this album include rockabilly guitarist James Burton, slide guitarist Ry Cooder, Buddy Emmons on pedal steel, Wrecking Crew pianist Larry Knechtel, drummer Jim Gordon, bassist Joe Osborn and fiddler Doug Kershaw.

“Jubilee Anne” is pure country, delivered with conviction by Souther; catchy, bouncy with a honky tonky groove; “Run, Boy, Run” (which I have to admit is my favorite track on this collection) was an obvious single; a rockin’ piece of youthful folly by Frey – sung with with a great deal of gusto and honestly, you can tell this planted the seeds of The Eagles’ sound – it would have fit comfortably on the first Eagles album and the harmonies between Frey and Souther are tight.  “Rebecca” has some lovely finger picking and rich, warm acoustic tones and is simply a standout; “Kite Woman” is a breezy moment of that particular “country rock” vibe at its absolute best; “Mister Mister” is one of the deeper lyrical tracks, with a very sympathetic and emotional reading from Souther and “Never Have Enough” is the “rocking-ist” moment – a thumper, where you can imagine hands clapping and raising beers as the crowd sings along.

Taken on its merits alone, this fine album deserved a much better fate (as so many do); the songwriting is mature, the arrangements well thought out and executed beautifully by the players and really does deserve a long, second look/listen.

Longbranch Pennywhistle is now available on CD and album